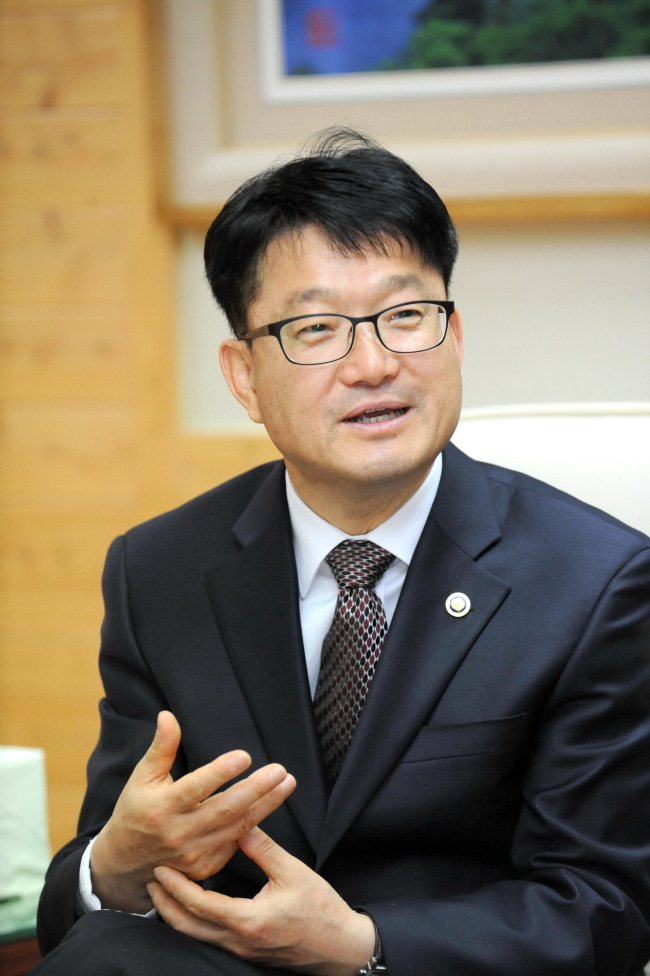 KFS Minister Shin Won-sop. (KFS)
The exchanges with countries such as Indonesia and Cambodia will help Korea secure necessary wood resources for sustainable growth, and create jobs for the young.

He stressed the importance of job creation not only for people in Southeast Asian countries to which Korea provides its experience and technology in afforestation, but also for young Koreans, who face a high unemployment rate of around 9 percent.

Minister Shin said the agency would further boost its internship programs coordinated with the private sector to create next-generation leaders and international specialists in forestry.

“In partnership with Korea Green Promotion Agency, we have supported some 140 young people gain education and experience in forestry resource development and cooperation in 11 countries including Indonesia and Mongolia since 2009,” Shin said in a written interview with The Korea Herald.

“We will continue to strengthen our internship programs to foster promising young Koreans who can become ideal candidates for employment by private companies.”

Shin added that it would help refortify the country’s forestry business and boost youth employment by improving its training and safety programs and giving opportunities to the young facing difficulties finding a job.

As Korea seeks to achieve sustainability of forestry resources, the KFS has been expanding its partnerships with Indonesia, Cambodia and Myanmar over the past years. It is expected to gain further momentum overseas as the country deregulates relevant laws to spur overseas afforestation projects.

It established relations with Indonesia through memorandums of understanding to collaborate in planting trees on 700,000 hectares in the region, and with Cambodia for a 200,000-hectares afforestation project in 2009.

The KFS also agreed with Myanmar to invest in the region’s afforestation as part of efforts to combat climate change at a forestry ministerial meeting in Busan last December.

Also, given the Southeast Asian countries’ close geographical proximity to Korea and low manufacturing costs, the region offers a good opportunity for Korean SMEs in the long term.

This was part of efforts to boost the country’s self-sufficiency of wood resources from 18 to 50 percent, in addition to job creation, Shin said.

“The KFS’ overseas afforestation projects are in line with plans to stably secure long-term supplies of wood resources such as environmentally-friendly wood pellets,” Minister Shin said.

“We need to actively prepare for growing demand for biomass pellets following the implementation of the Renewable Portfolio Standard policy (in Korea).”