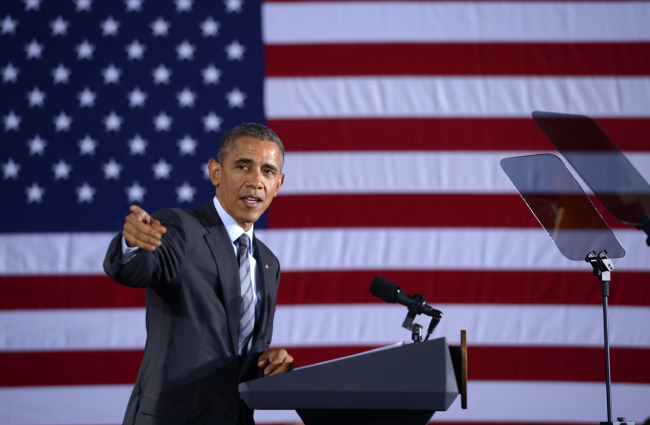 U.S. President Barack Obama delivers remarks on his proposal for budget for fiscal 2016 at the Department of Homeland Security in Washington D.C., Monday. (Xinhua-Yonhap)

WASHINGTON (AP) -- President Barack Obama set up another clash with Republicans by sending Congress a $4 trillion budget that seeks to raise taxes on wealthier Americans and corporations and increase domestic spending.

In a message accompanying the massive budget books on Monday, Obama said his proposals are "practical, not partisan." But even before the books were delivered, Republicans found plenty to criticize in tax hikes totaling $2 trillion.

"The president is advocating more spending, more taxes and more debt," said House of Representatives Speaker John Boehner. "A proposal that never balances is not a serious plan for America's fiscal future."

The annual budget proposals are more like wish lists than initiatives soon to become law. Congress is now fully controlled by Republicans who oppose Obama's proposals. And the budget resolutions eventually approved by Congress would be non-binding.

But budgets influence the spending bills that determine how much Americans will be taxed and how government programs will be funded.

Obama's proposal Monday puts into relief the divisions in Washington. Obama maintains that the U.S. economy has improved enough to raise some taxes and increase spending to help Americans who haven't benefited from the recovery. Republicans say Obama's proposals would threaten the recovery and the focus should be on eliminating the budget deficit.

Those differences are likely to be the core of the political debate during the final two years of Obama's presidency and could carry over into the 2016 race to elect Obama's successor.

Boehner and other Republican leaders said that the budget they produce this spring will achieve balance within 10 years, curb the explosive growth of government benefit programs and reform the loophole-cluttered tax code.

In a lengthy run-up to Monday's budget release, the Obama administration said its budget represented a strategy to strengthen the middle class and help "hard-working families get ahead in a time of relentless economic and technological change." The budget emphasizes the same themes as Obama's State of the Union address last month, when he challenged Congress to work with him on narrowing the income gap between the very wealthy and everyone else.

The new budget offers an array of spending programs and tax increases on the wealthy that Republican lawmakers have already rejected. But it puts Republicans in the politically awkward position of rejecting tax cuts for middle-class families.

The president also wants to give a huge boost to spending on infrastructure, funded by a one-time tax on profits U.S. companies have amassed overseas.

Many Republicans support the extra military spending but oppose increased domestic spending. Republicans control both houses of Congress for the first time in Obama's presidency.

Obama's fiscal blueprint, for the budget year that begins Oct. 1, would leave a deficit of $474 billion. Obama's budget plan never reaches balance over the next decade and projects the deficit would rise to $687 billion in 2025.

The administration contends that various spending cuts and tax increases would trim the deficits by about $1.8 trillion over the next decade, leaving the deficit at manageable levels.