[ The Korea Herald – Send E-mail ]
[Newsmaker] Stielike praised for success in Asian Cup
South Korea’s success in Australia has at least as much to do with Stielike’s capacity to inspire and motivate his players as with his ability to coach them.
By Korea Herald
Published : Feb 1, 2015 - 21:29
Updated : Feb 1, 2015 - 22:10
SYDNEY  ― Uli Stielike coached his first match for South Korea last October, barely three months before the start of the AFC Asian Cup. He would coach only four more friendly matches before the continental tournament kicked off in Australia in early January, and the general expectation was that there wouldn’t be enough time for him to do much with South Korea at the Asian Cup. 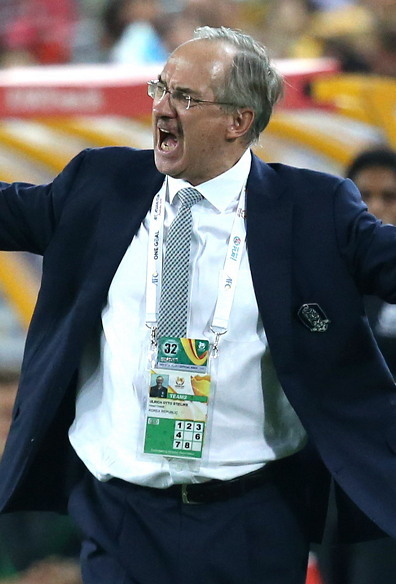 South Korean coach Uli Stielike. (Yonhap)
Yet the German-born coach took South Korea to the final against steep odds. Though the country fell to the host Australia 2-1 in extra time on Saturday and failed to end its 55-year Asian Cup title drought, Stielike still did admirable work.

A no-nonsense fundamentalist who constantly preached the value of ball possession and defensive responsibility, Stielike managed to bring together a team made up of players from leagues in eight different countries. And South Korea’s success in Australia has at least as much to do with Stielike’s capacity to inspire and motivate his players as with his ability to coach them.

South Korea had a sluggish start to the tournament. It had an underwhelming, 1-0 victory over Oman to open the group stage. With a few players sidelined with illnesses, Stielike had to juggle his lineup to eke out a 1-0 win over Kuwait, after which he declared that South Korea should no longer be considered a title contender.

South Korea regrouped to get past Australia 1-0 to clinch the top seed in Group A and began to show more signs of life. The team needed extra time to knock off Uzbekistan 2-0 in the quarterfinals, and enjoyed its most complete match of the tournament in the 2-0 victory over Iraq in the semifinals.

Early in the tournament, South Korea lost two key midfielders, Lee Chung-yong and Koo Ja-cheol, to injuries. The ones that left standing ably filled their void, as winger Son Heung-min and forward Lee Jeong-hyeop picked up the scoring load.

Stielike tinkered with his defensive line before settling on Kwak Tae-hwi and Kim Young-gwon as his center backs later in the tournament. They were the first center back pairing to start back-to-back matches under Stielike, and responded in kind. Kwak was named the Player of the Match in the quarterfinals against Uzbekistan, though Son scored twice in extra time to seal the victory. Kim scored the team’s second goal in the semifinals win over Iraq.

Stielike displayed more tactical flexibility than his predecessors, frequently switching positions for players and demanding that they make smart decisions on the fly in the heat of the battle. His approach held the players more accountable for their action, and the “team-first” attitude, however cliched, quickly became the norm.

He also encouraged healthy competitions within the team, and Kim Jin-hyeon beat out two FIFA World Cup members, Jung Sung-ryong and Kim Seung-gyu, for the No. 1 goalkeeping job. He tightened his grip even more with four clean sheet victories in five starts.

Next up for Stielike and Co. will be two friendly matches in March, which will serve as warm-ups for the Asian qualification for the 2018 FIFA World Cup. At the Asian Cup here, Stielike appears to have laid down solid foundation for those upcoming contests.

Looking ahead, Stielike said Saturday he has a team headed in the right direction.

“We have to stay on the right course,” he said. “We will have to keep competing in the same spirit. I’d like to congratulate my players. People in the Republic of Korea, you can be proud of our players.”