[ The Korea Herald – Send E-mail ]
[Newsmaker] N.K. demanded cash for summit: Lee memoir
By Korea Herald
Published : Jan 29, 2015 - 22:24
Updated : Jan 29, 2015 - 22:24
Former President Lee Myung-bak has revealed a series of sensitive foreign policy dealings, including the failed negotiations over an inter-Korean summit, during his term in his memoir obtained by the media ahead of its publication next Monday.

In the 800-page memoir, entitled “The President’s Time 2008-2013,” he includes details about his administration’s diplomacy with Pyongyang, Beijing, Washington and Tokyo, and defends his much-criticized resource diplomacy.

He said that the demand came at a working-level meeting in the North’s border city of Gaeseong following a secret meeting between then-Seoul’s Labor Minister Yim Tae-hee and Kim Yang-gon, director of the North’s United Front Department, in Singapore in 2009. 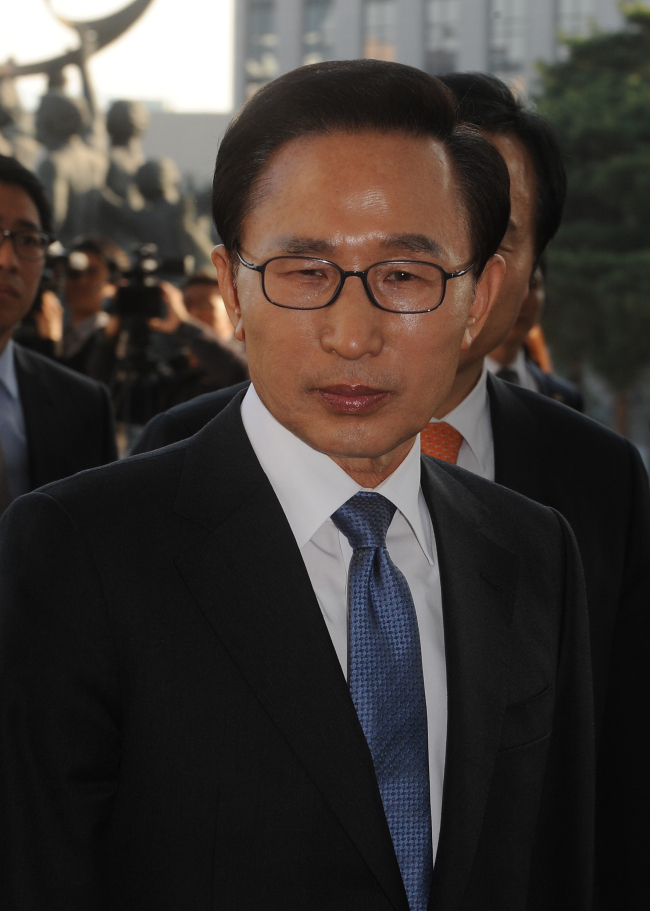 Former President Lee Myung-bak. (The Korea Herald)
Pyongyang first raised the issue of a summit when Kim Ki-nam, a secretary of the North’s ruling Workers’ Party, visited Lee at Cheong Wa Dae while in Seoul to attend the funeral of former President Kim Dae-jung in the summer of 2009.

During his talks with the North Korean delegation, Lee said, “I want to say to Chairman Kim Jong-il that the North has long claimed that the South should stay out of the denuclearization talks, and that it is an issue between Washington and Pyongyang, but I think differently.”

Concerning the inter-Korean summit, Beijing has encouraged Seoul to be positive about it, Lee noted.

During a trilateral summit between South Korea, China and Japan in Beijing in October 2009, then-Chinese Premier Wen Jabao said, “I met Chairman Kim Jong-il and he wishes” to hold the inter-Korean summit.

Lee said in response, “I am willing to meet (Kim) if we can talk heart to heart over all topics including the nuclear issue without any conditions or demand for something in return. And we want the summit to be held in the South as the two previous summits were held in Pyongyang.”

Later, Wen reiterated Kim’s wish for a bilateral summit during an ASEAN Plus Three (South Korea, China, Japan) summit, Lee said. In response, Lee said, “North Korea is too fastidious about the conditions. I can’t understand this when we want to hold the summit unconditionally.”

In his memoir, Lee also touched on his administration’s efforts to secure an apology from the North for its torpedo attack in March 2010 that killed 46 sailors. Lee said the North expressed “regrets as ethnic Koreans, and that it demanded 500,000 tons of rice as the South called for an apology and a promise to prevent a such a provocation from reoccurring.”

The memoir also revealed that after the North’s artillery attack on the border island of Yeonpyeongdo in November 2010, the North secretly sent four senior security officials to Seoul. Lee refused to meet them as they did not carry any letter from then-North Korean leader Kim Jong-il.

Touching on a summit with then-Chinese President Hu Jintao in 2012, Lee said that he told Hu that U.S. troops in the South would not move northward from their current locations should Korea be unified. Hu just listened without commenting, Lee said.

As for criticism of his so-called “resource diplomacy,” he dismissed it as a political offensive, arguing that it was a long-term project that would yield results a decade or three decades later. His political foes have argued that taxpayers’ money has been squandered on his policy drive, which has failed to produce tangible results.