Nicolas Ouchenir is a calligrapher, a member of a rarified profession whose ink appears on the must-have invitations of Europe’s fashion shows.

He may not personally meet all the VIPs attending the catwalk parades. But his personalized flourish to them, deliberately evoking the elegance of times past is carried close in their hands, in handbags, in tailored breast pockets.

With Paris Fashion Week about to kick off on Wednesday, Ouchenir is being kept busy. The phone rings incessantly in his office with the fashion houses’ press and publicity people calling to reserve his service ― most at the last minute. 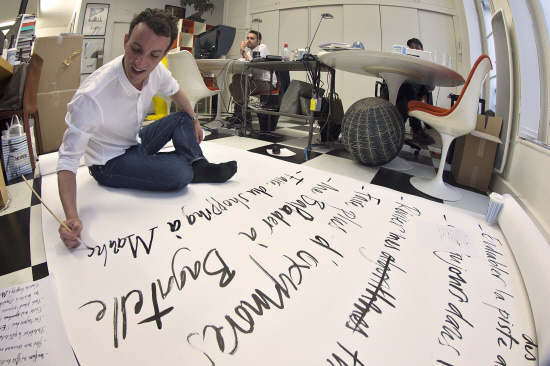 French calligrapher Nicolas Ouchenir works in his studio in Paris on Jan. 14. (AFP-Yonhap)
“You have to react fast,” says the 36-year-old, who is dressed in jeans and a white shirt, and sat behind a desk upon which piles of invitations await.

Next to them are pots filled with quill pens, pens of whittled reeds and calligraphers’ instruments, all of them on a stained leather desk pad.

He knows well the codes and hierarchies of the fashion world, having eased ink onto countless cards that serve as coveted entry passes to the biggest fashion events in the world.

He is especially versed in the seating plans for those invited. Codes often marked on the invites correspond to the spots where the guests are to sit ― with the front row, just a stiletto’s slide away from the catwalk, reserved for the elite.


‘Fall asleep in the office’

“I have no fixed working hours,” Ouchenir says. He works out of an office on Paris’ chic-and-expensive rue Saint-Honore ― shared with several other entrepreneurs working in different sectors.

“Sometimes I work all night and fall asleep in my office and awake to find ink everywhere, or I spend whole nights waiting for a seating list in a PR’s office,” he says wryly, his humor serving him well in a business where “nervous breakdowns happen often.”

Ouchenir has been a professional calligrapher for 12 years.

He had an “obsession” with writing, he says, born from when he saw his childhood doctor in Paris scribbling out prescriptions with an old-fashioned quill.

There was no specialized course. He taught himself the craft after completing business studies.

His career began when he started writing invitations for art show openings at the gallery where he was an assistant.

“I didn’t know that it was a profession. I just loved doing it. ... And it worked really well and people got used to seeing it. After a while, they only had to see the writing on the envelope and they almost didn’t have to open the invitation to know where it came from.”

But building an “exclusive” reputation was, he says, the real key to success. For each client he develops a tailored style of writing, “like a fingerprint.”

For the French fashion brand Berluti, known for its men’s luxury shoes and leatherwear, the writing is “very masculine, very simple, straight-lined, very bespoke,” he says.

Margiela writing, for haute couture, is John Galliano English-style, but for its pret-a-porter it’s more like a typewriter.”

It’s not just the fashion world that he lends his talents to.

He has also done illustrations in magazines, worked for the Venice Biennale art exhibition, provided lettering for carmakers and for Champagne houses, redone the logo for the Ritz Hotel in Paris, hired his hand to old aristocratic families ― and even stylized designs for unique tattoos.

There have been requests for messages to be engraved on tombstones. Also contracts for couples enjoying sado-masochistic relations who want their “rules” spelled out in flourish and verse.

Once, a Russian oligarch, he says, asked for wedding invitations to be drawn up ― in blood. He complied, by seeking the ingredient at a butcher’s shop.

In his personal life, Ouchenir doesn’t entirely spurn emails and other digital correspondence, but he still sends letters and postcards, too.

Today, he muses, “so many people are afraid of writing and the pen.”

Calligraphy endures, he says, because “it has become rare ― it’s like haute couture itself: the more exclusive it is, the more it is desired.”