According to the Korea Institute for Health and Social Affairs, the poverty rate of Koreans aged 65 or older was 48 percent in 2013, while the average rate for all Koreans was 13.7 percent.

Single-person households had the second-highest poverty rate ― 47. 2 percent ― among all groups of people, including children, the employed and single-parent households, in 2013.

The statistics are alarming as the number of the elderly, as well as single and two-person households, has increased dramatically here over the last 20 years. 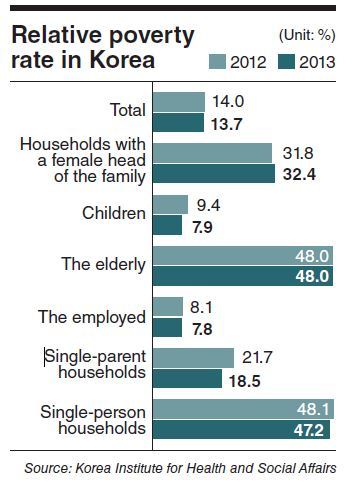 Meanwhile, 48.2 percent of all Korean households in 2010 consisted of one or two people, according to KIHASA. Last year, they made up 49.9 percent of all families in Seoul.

The Seoul Metropolitan Government predicts that more than 60 percent of Seoul families will be single or two-person households, including single-parent families, by 2035.

Notably, the poverty rate of households with female heads of the family was 32.4 percent in 2013, the third highest among all groups of Koreans, while the rate of single-parent households was the fourth highest at 18.5 percent.

“From this research, we found that the elderly, single-person households, households with female heads of the family and single-parent households are the most vulnerable to poverty among all Koreans,” wrote KIHASA researcher Im Wan-seob in the report.

“Antipoverty programs are needed for these groups and their specific needs.”

The poverty rate of South Korean children was 7.9 percent in 2013, while the rate for the employed was 7.8 percent the same year.