Five economic ministries and agencies including the Science Ministry reported their new policies to President Park Geun-hye at the government complex in Sejong City.

The Industry Ministry said it set this year’s exports target at over $600 billion and foreign direct investment at more than $20 billion.

President Park urged the economic ministers to implement policies aimed at developing a creative economy, stressing the importance of timing. 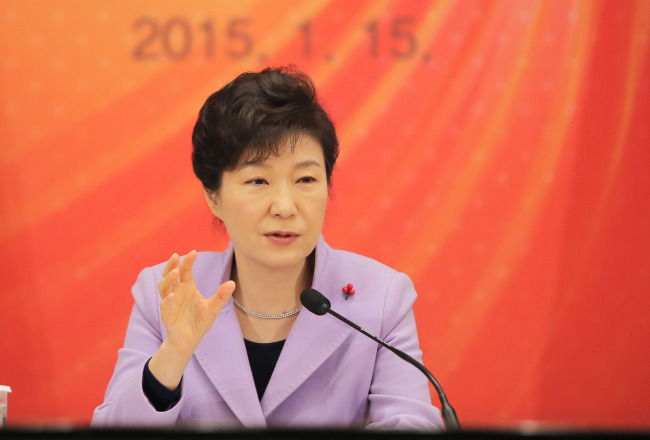 President Park Geun-hye speaks before being briefed by the five economy-related ministries at Cheong Wa Dae on Thursday. (Yonhap)
“The top priority of the 2015 economic policy will be to revitalize the economy which is in a slump,’’ Park said. “There is a timing issue to transit to a new economic paradigm. The creative economy that we seek to build for the next three years will lay a foundation for economic growth in the next 30 years,’’ she added.

In his briefing, Science and ICT Minister Choi Yang-hee said the government will create a system to incubate start-ups.

As the first step for this mission, the government set up four centers for innovation outside of Seoul to develop technology across the nationin 2014. The number of start-up incubation centers will increase to 14 by the year-end.

In addition, the ministry said it would drive to cultivate new industries with high growth potential, most of which will be service and tech-driven businesses, such as software, smart cars, bio and fifth- generation mobile networks.

The money for the new industry and market creation and promotion will amount to 100 trillion won, he said.

Industry Minister Yoon Sang-jick said the government would make full use of its free trade agreements, promising smaller companies to help them meet their exports target this year and invest in future-oriented services and industries.

Exports is critical for Korea to meet its annual growth target in that the nation’s overseas shipments took 42.91 percent of the country’s GDP in 2013.

For growth in exports, the ministry said it will focus more on utilizing the FTAs instead of seeking new trade pacts.

Once the FTA with China is ratified, South Korea will be the only significant economy in the world that has open trade regimes with the world’s top three powerhouse. Seoul already has FTAs with the U.S. and the European Union.

The ministry will launch a number of support programs to help small and medium enterprises that have the capability to sell goods abroad but have been constrained by a lack of trained employees and knowledge about foreign trade rules.

Increasing the portion of exports handled by SMEs is critical for more balanced growth and a reduction in the country’s dependence on a handful of large conglomerates, such as Samsung and Hyundai Motor.

As an exemplary SME support program, the ministry will work with the Korea International Trade Association to set up a “China Desk” in March to develop products that can be sold in the world’s No. 2 economy.

The government will also designate 270 trading companies to help SMEs, up from 167 last year.

“Such measures will allow SMEs to account for 35 percent of the country’s exports in 2015 from 34 percent last year,” the Trade Ministry said.