The article appears to be the first time that mainland media have reported allegations of a faction formed by the two once-powerful men, long seen as allies by analysts.

China’s ruling party is riven by factional divisions but consistently seeks to present a united front to outsiders. 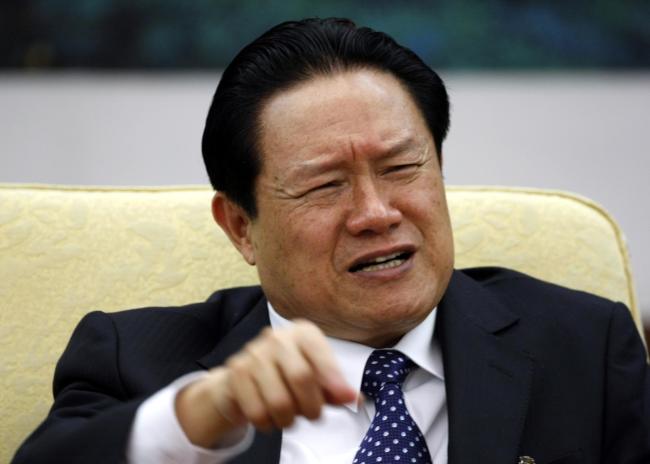 Zhou Yongkang. (Yonhap)
Zhou, who was arrested and expelled from the ruling party last month, is the most senior party official to face prosecution since the 1980s, in a fall that sent shock waves through the communist elite.

He moved one step closer to trial last week when the party’s internal watchdog announced that his case had been sent to prosecutors.

Officially the action against Zhou is part of Xi’s much-publicized anti-graft drive that has targeted both high-level “tigers” as well as low-level “flies.”

But critics note that China has failed to implement institutional safeguards against graft, such as public asset disclosure, an independent judiciary, and free media, leaving anti-corruption campaigns subject to the influence of politics.

Bo, meanwhile, fell from grace after a scandal erupted around the 2011 killing of a British businessman, and he was later sentenced to life in prison for graft.

The onetime Communist Party star’s open ambition and hard-charging approach were seen to have led to his ouster from the ranks ― factors that experts say also contributed to Zhou’s downfall.

Last month, after a meeting presided over by Xi, the ruling party’s Central Committee issued a statement warning against factionalism.

“Party members should make party rules their priority, and the party is adopting ’zero tolerance’ toward cliques and factions within it,” the statement read.

A report by China’s official Xinhua news agency later identified several factions by name, including a group centered on the powerful oil industry, in which Zhou was a key player.

According to the Phoenix Weekly report, Zhou and Bo once held a secret meeting at which they advocated “adjusting” the reform and opening-up policy initiated by former leader Deng Xiaoping in the late 1970s.

The policy has propelled China’s economic rise over the past three decades, and the country’s elite 25-member Politburo said in a 2013 statement that it “should be continuous and never stop.”

The Phoenix Weekly report also alleged that in 2012, Zhou tipped off Bo that Bo’s right-hand man, police chief Wang Lijun, had sought asylum at the U.S. consulate in Chengdu ― the move that blew open the scandal surrounding his boss.

Several mainland news sites have picked up the Phoenix Weekly report, and news portal Netease on Wednesday ran a slideshow of 20 photos of Zhou together with Bo and other officials currently being targeted for graft, some of whom were identified by red circles drawn around their faces.