“We are currently operating a beta site and observing the outcome. We won’t make haste in advancing into the global market, but when the time is ripe, we won’t hesitate,” Park Eun-sang, CEO of the social commerce company, told The Korea Herald in his first media interview.

Park said Alipay is more of a thank-you service for the Chinese customers who log on to the Korean website.

“We have had visitors from China since our early stages shopping for beauty and fashion items. And we wanted their payment process to be easy,” he said. 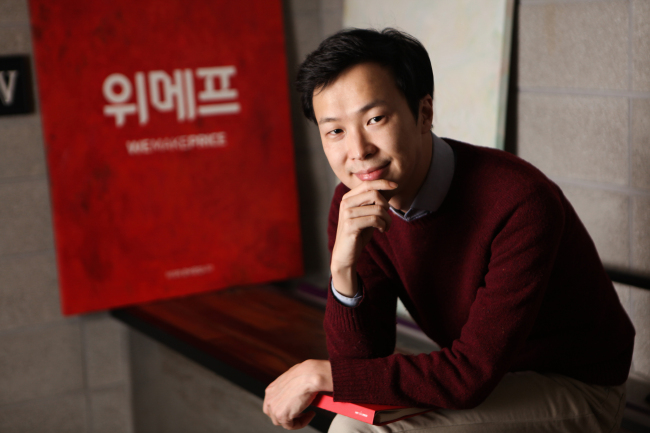 Park Eun-sang, CEO of WeMakePrice. (WeMakePrice)
“China is a very delicate market. Customers there demand a more intimate relationship with the vendors and their expectations are quite high and different even compared to Korea, which is also regarded as a tricky market. So we will go slowly and steadily.”

Going global seems to be the natural next step for WeMakePrice, which emerged as the local market leader early this year. The company, which launched its social commerce service on Oct. 8, 2010, had 13.2 million visitors in September and transacted sales of 160 billion won ($145 million) of goods in that period.

To widen its lead over market competitors, which includes not only fellow social commerce firms such as Ticket Monster and Coupang but also online retailers such as eBay Korea and 11st, the company poured 40 billion won into marketing from September to December.

The company has also reinforced its services by brushing up its policy of offering no-questions-asked full refunds and placing more than 2,000 workers in the customer service division. The company has aggressively recruited merchandisers to manage 35,000 kinds of items it deals with every day and has recently strengthened its data management team, which analyzes big and small data related to customers’ shopping patterns.

Park said such investments are designed to not only captivate domestic users but also to brace themselves ahead of the “invasion of global retail giants.”

“If we don’t move right now, we won’t be able to compete against Amazon or Alibaba, which are expected to enter Korea very soon. I give it two years maximum for us to stay in the lead if we don’t seek to innovate and challenge ourselves,” Park said.