NEW YORK CITY (AP) -  Protesters around the country rallied for a third day over a New York grand jury's decision to not indict a white police officer in the chokehold death of an unarmed black man. 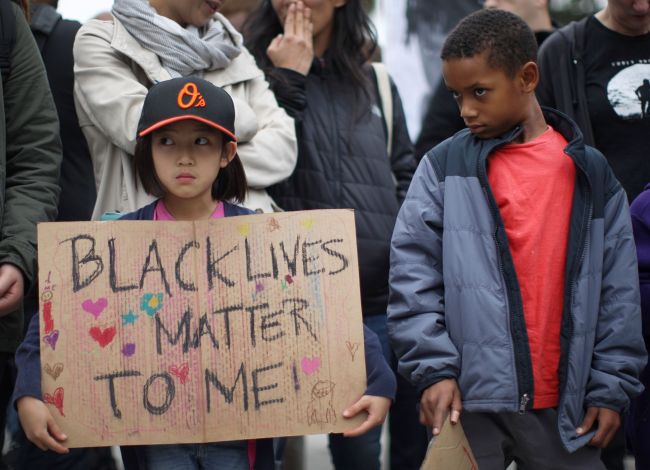 Protesters rally near LAPD headquarters on Dec. 5 in Los Angeles. The decision follows a similar ruling last week in which white Ferguson, Missouri police officer Darren Wilson was not indicted in the shooting death of unarmed black teenager Michael Brown. Those protests resulted in hundreds of arrests in Los Angeles. (AFP)
Hundreds of protesters marched and many briefly laid down in Macy's flagship store, Grand Central Terminal and an Apple store. They streamed along Fifth Avenue sidewalks and other parts of Manhattan, with signs and chants of “Black lives matter'' and “I can't breathe.''

Nationwide, tensions were already running high because of a grand jury's decision last week to not indict a white officer in the shooting death of black 18-year-old Michael Brown in Ferguson, Missouri. On Wednesday, more protests erupted after a grand jury in New York City decided not to indict a white officer in the chokehold death of Eric Garner, a black man who gasped “I can't breathe'' while he was being arrested for selling loose, untaxed cigarettes.

In suburban New York City on Friday, about 65 demonstrators lay down on a street corner in protest. Among them were Jason Walker of Atlanta, in New York for a wedding, and his 3-year-old daughter, Jaidyn. She told her father she wanted to lie down when the demonstrators did, and she lay on the sidewalk for the full 7 minutes, occasionally covering her eyes.

In New Haven, Connecticut, home of Yale University, hundreds of demonstrators marched Friday afternoon from the law school to the courthouse. In New Jersey, dozens of students from Rutgers University walked through New Brunswick, slowing downtown rush-hour traffic to a crawl and forcing the city to postpone a tree lighting ceremony scheduled at Monument Square.

In Colorado, students walked out of class Friday to protest the decisions not to prosecute police in New York and Ferguson. In Aurora, a suburb of Denver, eighth-grader Bennie Mahonda walked about 5 miles (8 kilometers) to the municipal center, shouting “Hands up, don't shoot!'' to honks from passing cars. She had her parents' permission but promised her mother she would return to class after the demonstration, which she called “social studies outside of class.”