“The biggest adversary of a good design is not a bad design, but a mistaken belief that one is creating a good design,” Herald Corp. chairman Jungwook Hong said in his opening address. 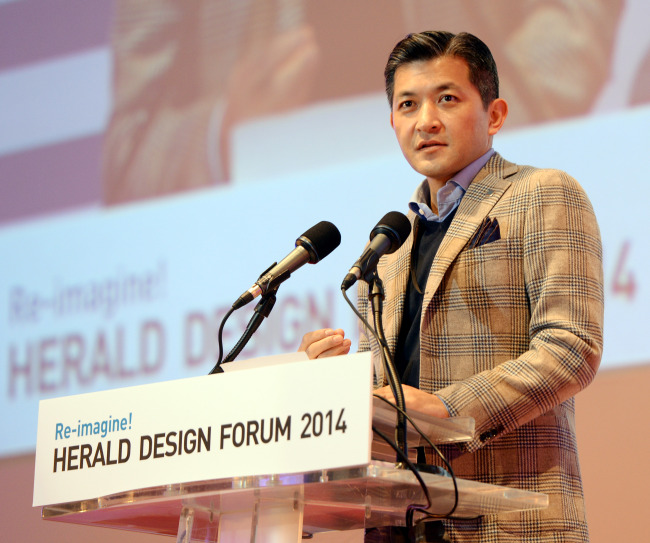 Herald Corporation chairman Jungwook Hong gives the opening speech at the Herald Design Forum 2014 in Dongdaemun Design Plaza in Seoul on Wednesday. (Park Hyun-koo/The Korea Herald)
“Good design is the combination of aesthetics, effective engineering and attention to detail. A lot of factors restrict the role of design such as focusing only on aesthetic aspects, practicality or maximizing profits. But good design should be based on the love of human beings and nature,” he added.

President Park Geun-hye also noted that the creativity and imagination that drive good design are also qualities that help promote a creative economy, a key motto of her administration.

“The government is pushing creative economy as the new paradigm of the Korean economy. The imagination, creativity and diverse ideas from each and every individual are ultimately what will drive the growth of this new paradigm,” Park said in her congratulatory letter presented on the video screen at the forum.

Culture Minister Kim Jong-deok and Seoul Mayor Park Won-soon stressed that the forum is a productive and rich platform for the discussion of design and its growing role.

“Design is producing new values when combined with other areas. It is a tool that realizes the world’s most innovative technologies and effectively delivers them to people. There are no set boundaries for design. Its potential is unlimited,” said Kim.

Seoul Mayor Park said design has been the key strategy for city governments around the world to improve infrastructure and take further steps toward becoming green cities in the 21st century.

Ten speakers gave talks on the latest innovative undertakings in their fields, under the theme of the forum “Design Spectrum, Expanding the Definition of Design.”

The first speaker was the prominent architect Rem Koolhaas, founder of the OMA and curator of this year’s Venice Architecture Biennale. He talked about the changes in perspectives on design through the years. He said design has moved on from being a form of aggressive intervention in our surroundings to being a soft, attractive tool, which aspires to make our lives comfortable. He cited his latest exhibition at the Venice Architecture Biennale as an example of the changing perceptions about design. He examined changes in elements of architecture such as ceilings, walls, doors and staircases in the history of architecture.

Architect Joon Paik continued the discussion about the challenges facing modern architecture and design. He introduced some of his recent architecture projects, including the Spaceport America in New Mexico.

Mathew Cockerill, associate design director at Seymourpowell, brought up the most pressing issue in design today: sustainability. He stressed the importance of creating sustainable design in a modern world where “90 percent of products end up in waste in three months.” He noted efficient processes for maintaining, remanufacturing and recycling products.

Daniel Kim, Asia partner of Daylight Design, a San Francisco-based innovation and design consultancy, stressed the responsibilities of designers. He raised issues that designers should ask themselves such as why they are designing, the impact of design on society and their social responsibility. 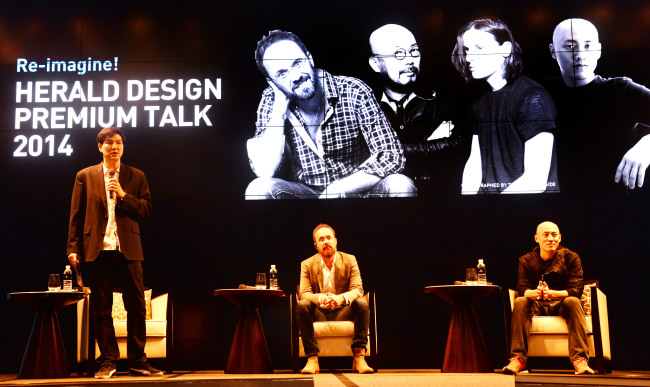 Designer and forum moderator Daniel Kim (from left) speaks alongside Alexander Schill and advertising expert Park Seo-won during the Herald Design Premium Talk at JW Marriot Dongdaemun Square Seoul in Seoul on Wednesday. (Park Hyun-koo/The Korea Herald)
Alex Schill, an advertising guru, looked at design on a broader scale. He said that in order for companies to survive in this fast-changing world, they need to know how to sell their brands, not products.

Fashion designer Olivier Theyskens talked about his career in fashion as a creative director at Rochas, Nina Ricci and, most recently, Theory, as well as the inspirations that have driven him to create new designs at different fashion houses.

Architect Nahyun Hwang talked about the need to “reprogram” metropolitan cities which are in the end stage of the development cycle. She mentioned some of the recent projects she had been involved with, including the Nam June Paik Library in the Nam June Paik Art Center in Yongin, South Korea, and the High Line in New York.

Architect Jeff Vandeberg, an innovator in urban renewal, shared some of his previous architectural projects in major cities in the U.S., including Philadelphia and New York, as examples of how to bring about changes in an old urban environment.

Artist Chris Riggs shared his attempt to bring peace and love to the conflicted world through his pop art paintings, featuring words “peace” and “love” repeatedly drawn on a canvas. He also shared how he began to use dolls in his paintings by simply attaching Barbie dolls to the surface of a canvas as a way of making art toys incorporated with his signature funky, pop art painting design.

Food stylist and caterer Peter Callahan showed a variety of food presentations at events he planned for famous figures such as Alexander Wang, Martha Stewart and Jenna Bush, daughter of George W. Bush and more. He shared the tip that differentiates his food presentations from others -― shrinking food.

He explained how he attempted to bring in fresh ideas in parties by making popular food items such as hot dog, meatball spaghetti and sandwich in small sizes and presenting them in creative and beautiful displays.

“I’m trying to bring something different in what I do and what already exists,” said Callahan, who is also the author of a food style book “Bite by Bite.”

Along with the lectures and discussions, creative design products from daily necessities to eco-friendly organic food products are being showcased at the Herald Design Market in partnership with the Seoul Design Foundation until Sunday at the Dongdaemun Design Plaza. 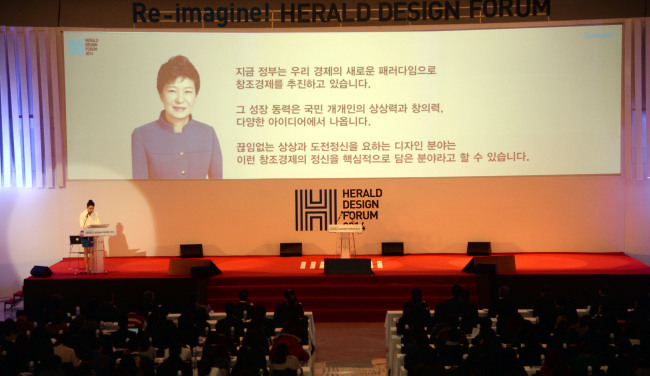 The opening ceremony for Herald Design Forum 2014 is under way at Seoul's Dongdaemun Design Plaza on Wednesday. 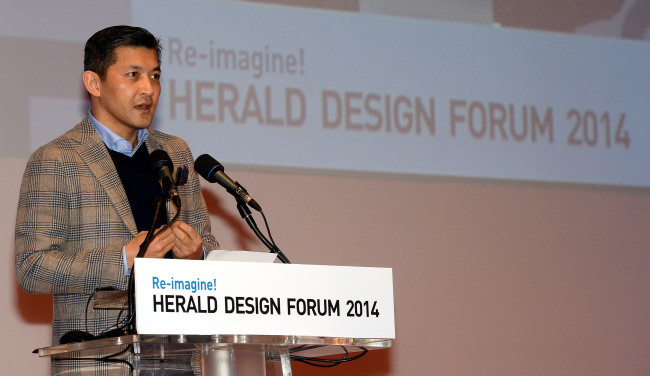 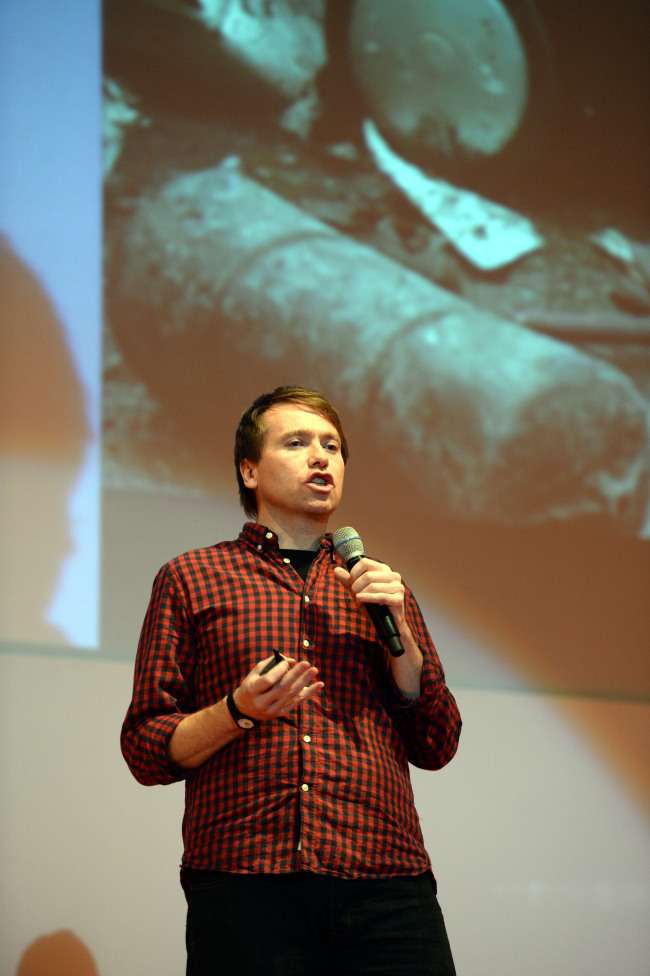 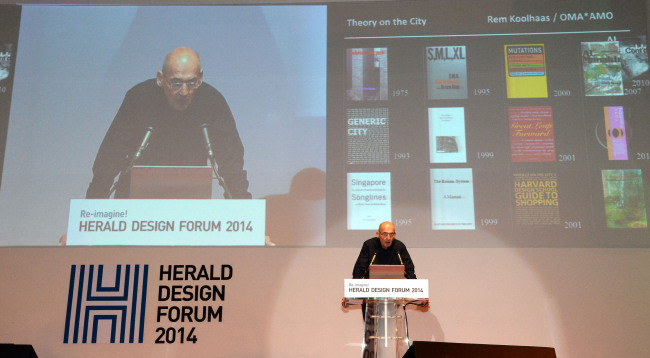 Rem Kookhaas speaks at the "Creative Design for Architecture" session. 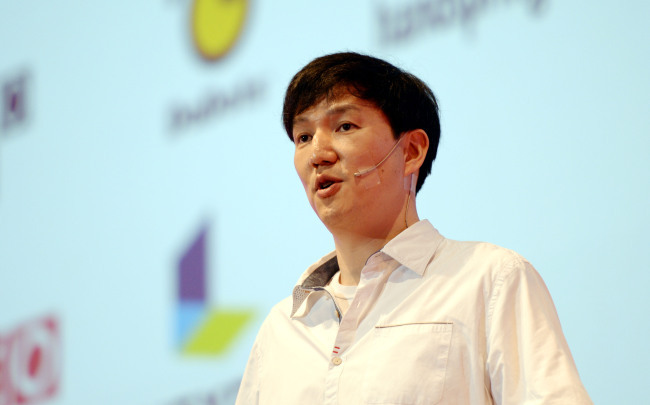 Daniel Kim delivers a speech on design for sustainability. 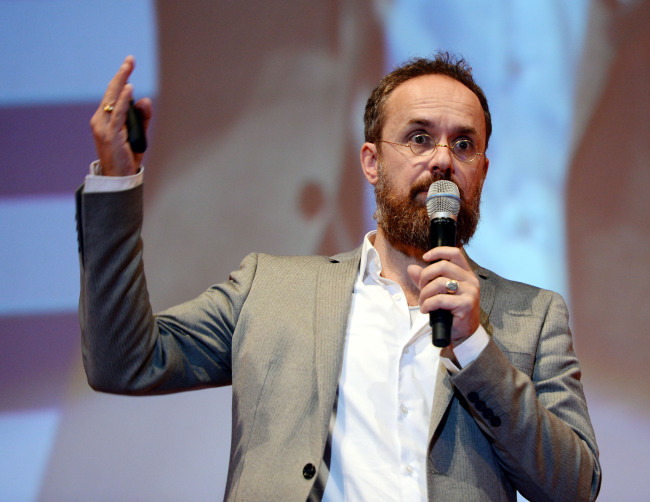 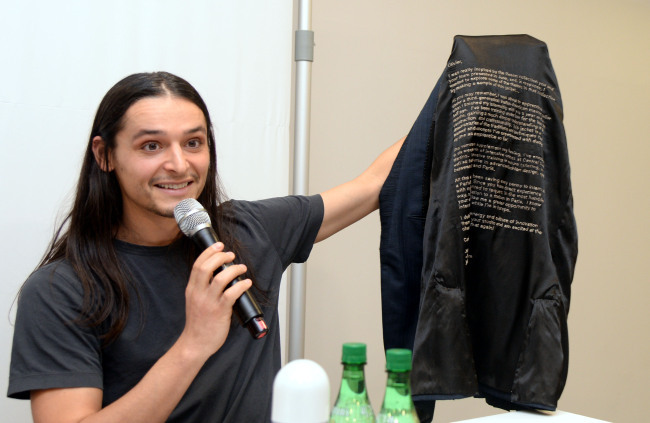