Ko won the $1 million bonus from the inaugural “Race to CME Globe” on Sunday by getting into a three-way playoff. Then, the 17-year-old added an extra $500,000 when she defeated Carlota Ciganda of Spain on the fourth extra hole at Tiburon Golf Club to win the CME Group Tour Championship.

Ko made par all five times she played the 18th hole on Sunday, and the last one paid handsomely. 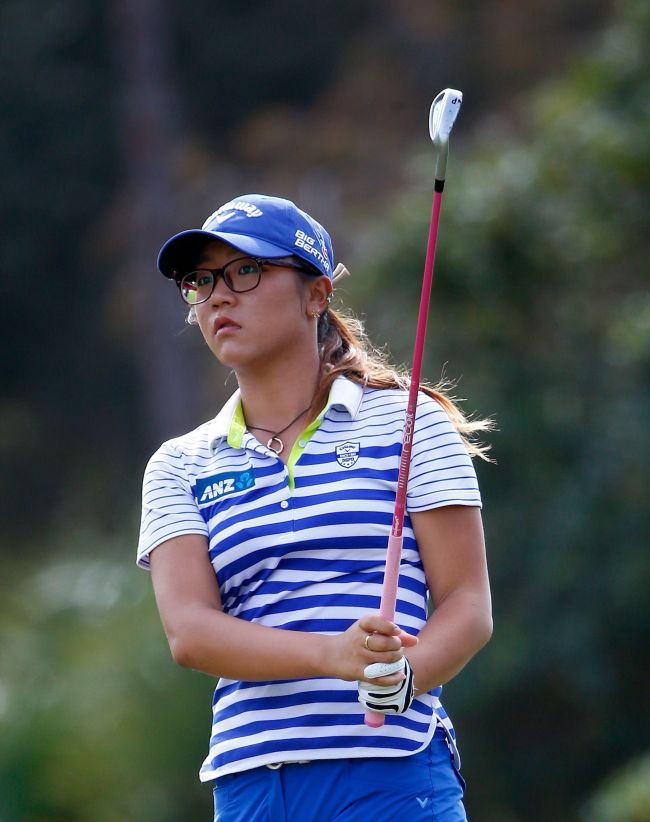 Lydia Ko of New Zealand plays a shot on the second hole during the final round of the CME Group Tour Championship at Tiburon Golf Club in Naples, Florida, Sunday. (AFP-Yonhap)
“It’s been an awesome week, and a week that I’ll never forget,” Ko said. “When I saw that $1 million in the box, I was like, ‘Wow, I wonder who the winner of that will be?’ It’s amazing. I’ve never seen that much cash in one place before.”

Only the tournament earnings counted toward the money list. The $500,000 from her third victory of the year made Ko the first LPGA Tour rookie to surpass $2 million in one season.

Ciganda and Julieta Granada of Paraguay certainly helped Ko’s cause.

Granada, who closed with a 1-under 71, was the first to exit the playoff when she three-putted from just off the 18th green. Her 5-foot par putt spun in and out of the cup.

Ciganda, who shot a 70, had two good chances to win. She missed a 3-foot birdie on the 17th hole in regulation that would have given her the lead. She also missed a 5-foot birdie putt on No. 18 in the third playoff hole for the victory.

On the fourth time at No. 18 in the playoff, Ciganda pulled her approach from the fairway and watched it bounce down a slope and into the hazard.

“What the ...” Ciganda said, without finishing the sentence as her shot sailed toward trouble.

She took a penalty drop and chipped to 3 feet. Ko needed only two putts for the win, and her first putt stopped an inch from going in. No matter. The kid was a winner again, her fifth LPGA Tour title before her 18th birthday. She was an amateur when she won her first two LPGA titles.

Ko wasn’t the only big winner in the LPGA Tour finale.

Stacy Lewis never had a chance to win the tournament or the $1 million bonus, though she walked away with her own slice of history. Lewis became the first American in 21 years to sweep the three most significant awards on the LPGA Tour ― player of the year, the Vare Trophy for the lowest scoring average and the money title.

“The $1 million would have been nice,” Lewis said after a 71 to tie for ninth place. “But those three, that’s what I came here for.”

Ko had a 68-68 weekend, and she established herself quickly on another blustery day with three birdies in eight holes to take the lead. She hit her approach to 3 feet on the 13th and looked as though she might pull away.

The LPGA decided to use one hole for the playoff ― the 18th hole, which yielded only four birdies all week. True to form, victory went to the player who didn’t make a mistake. Then again, Ko didn’t do much wrong in a rookie season like no other.

“She’s a great player,” Lewis said. “She got that innocence about her that she doesn’t even realize what’s going on. She probably has no idea how the scenarios and points work out. Maybe it’s to her advantage.”

Going into the LPGA Tour finale, the top three in the Race to CME Globe only had to win the tournament to capture the $1 million bonus. Lewis wound up six shots out of the playoff. Park In-bee, who was at No. 2 in the standings, never got on track and tied for 24th at even-par 288.

Ko wrapped up the race by getting into the playoff, win or lose, which she said helped to alleviate the pressure.

Morgan Pressel had a 72 and finished alone in fourth, while Michelle Wie (70) tied for fifth. (AP)