A welcome reception for select diplomats, businessmen and journalists was held at the Finnish Embassy in Seoul, last Wednesday.

The 46-year-old wunderkind from Helsinki told reporters that he was delighted to visit Korea on his first official tour of Asia. He said his first visit had been in 1997, when he was a doctoral student attending a seminar on international relations.

“Finland and Korea share many similarities, such as our belief in sovereignty, democracy and the market economy,” Stubb said in a private interview with The Korea Herald at the embassy. Finns and Koreans also have “similar mentalities,” shaped by their hard-won identities through independence struggles. 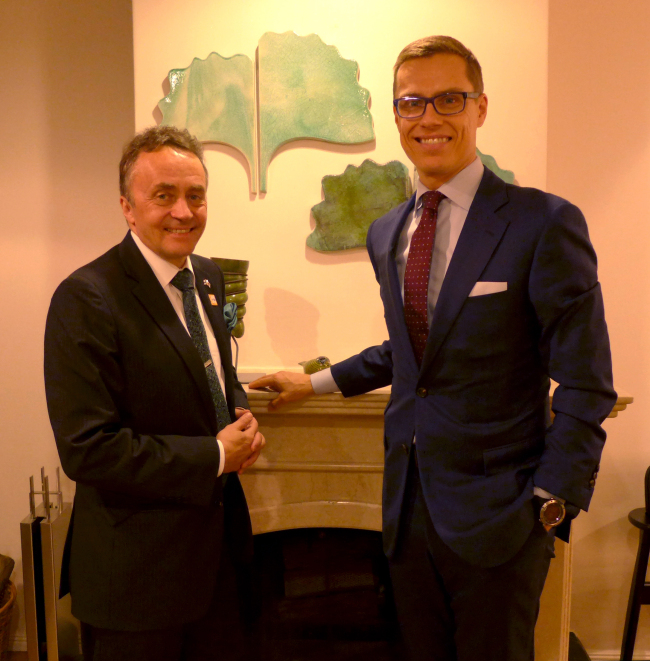 Finnish Prime Minister Alexander Stubb (right) and Finnish Ambassador to Korea Matti Heimonen pose at the Finnish Embassy in Seoul last Wednesday. (Joel Lee/The Korea Herald)
Finland remained in the “gray zone” between the East and the West during the Cold War, Stubb said. Sandwiched between powerful Sweden and Russia, it had to balance its strategic and economic interests by remaining neutral and flexible.

Equally “realistic” was Finland’s decision to immediately join the European Union after the fall of the Soviet Union, and the country has “not looked back since,” according to Stubb.

The prime minister said that Finland benefitted greatly from the Korea-EU free trade agreement, which went into force in July 2011; the trade volume between Korea and Finland reached $1.7 billion last year.

“The more free trade there is, the better it is for both countries,” Stubb said. “Forty percent of our gross domestic product comes from international trade.”

With multilateral trade agreements falling out of favor throughout the world, Finland looked to make bilateral agreements with the European Union and third-party countries, he added.

Stubb said that his government has been making concerted efforts to shore up the economy by giving seed money to up-and-coming companies and lowering the corporate tax from 26 to 20 percent.

“The less state intervention, the better for businesses,” Stubb said, stressing that it is the private sector that feeds growth in Finland.

Regarding Finnish telecommunications company Nokia’s decline in recent years, Stubb noted that Nokia has reinvented itself as a global networks provider, becoming the largest foreign networks company in Korea. Nokia is working to build fifth-generation networks for the 2018 PyeongChang Winter Olympics.

In Finland, Nokia initiated a “bridge program,” supporting former employees who aim to launch new businesses. There is a vibrant entrepreneurial momentum that has sprung from the combined efforts of the government, entrepreneurs and venture capital.

The Start-up Sauna program by Aalto University supports new initiatives by students. The Finnish government runs the Innovation Mill program under the aegis of the Tekes public agency, providing 2.6 billion euros ($3.2 billion) in funding and assisting 3,500 venture companies a year.

Stubb, who has published numerous books, papers and columns on the European Union, also shared his views on Finnish education, widely regarded as the finest in the world.

“The strength of Finnish education is that everyone gets to start from the same playing field,” he said. “Teachers enjoy much autonomy to push each student forward. We let their potentials flourish.”

Based on his experience as a university professor before entering politics, Stubb said that it is important to ingrain curiosity, analytical thinking and expressive skills into the child. “Learning by rote is old-fashioned,” he said.

Investing in education is like “putting money in the bank,” according to Stubb. “It’s the best investment to make.” He emphasized that teachers in Finland are highly qualified, respected and well-paid.

Becoming a teacher in Finland is also competitive ― one of the requirements is a master’s degree. Stubb pointed out that Finnish students consistently topped the Program for International Student Assessment, a test of 15-year-old students in mathematics, science and reading.

The tall, energetic leader was previously a member of the European Parliament and minister of foreign affairs and foreign trade between 2008 and 2014. He was sworn in as the head of the government in June this year.

Stubb is known to be an avid golfer, marathon runner and ice hockey player, and a fluent speaker of Finnish, English, Swedish, German and French. He has over 14,000 followers on Twitter.

Stubb has publicly expressed liberal political views ― affirming his commitment to Europeanism, internationalism and multiculturalism. In addition to approving same-sex marriage, Stubb is a patron of Helsinki’s Pride Parade, a celebration of lesbian, gay, bisexual and transgender culture and pride.