[ The Korea Herald – Send E-mail ]
[Newsmaker] Will price controls save publishing?
By Korea Herald
Published : Nov 20, 2014 - 21:39
Updated : Nov 20, 2014 - 21:49
Korea will introduce a new book price control system on Friday in an effort to salvage its moribund publishing industry. But whether it will be sufficient to turn around Koreans’ dwindling interest in books remains an open question.

“The new measure is about taking the bubble off book prices and bringing about a healthier ecosystem in Korea’s book industry,” said Kim Hee-bum, vice minister of culture, sports and tourism.

“It is intended to plug loopholes in the existing regulations, which have led to an excessive discount war among sellers.”

Korea already has a fixed book price system in place, but due to “loopholes,” only 13 percent of all books circulated in the country have been subject to that regulation. Introduced in 2003, the measure caps the maximum discounts for new titles at 19 percent for 18 months after the date of publication. Textbooks, study books for schoolchildren and how-to books are given exemptions.

The new scheme will lower the cap to 15 percent and cover all books ― regardless of their genres or how long they have been on the shelves. Instead, publishers are entitled to re-set a book’s price 18 months after its publication date.

“We expect the new measure to induce book prices to stabilize at a reasonable level,” the ministry official said. 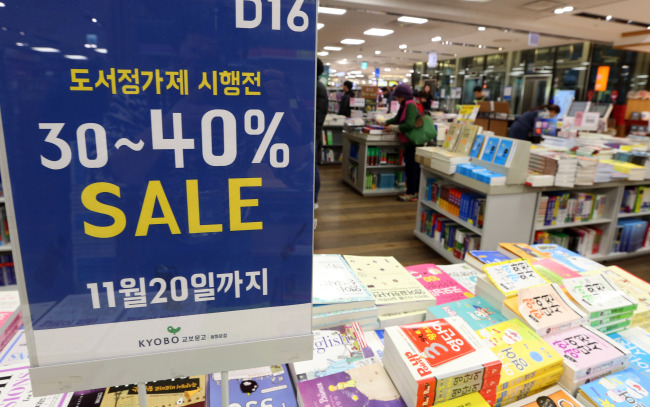 A discount sign is put up at Kyobo Bookstore, the country’s largest bookstore, in Seoul on Thursday, a day before a new fixed book price system goes into effect. (Yonhap)
Publishers, too, admit that the price competition, enabled by the loopholes and spurred on by online giants such as Yes24, has been distorting the pricing mechanism in the book market.

While the regulations did little to bolster the industry, Koreans’ book consumption dropped to a 10-year low last year. An average Korean adult read 9.2 books in an entire year.

The new fixed price system is a hard-won compromise among all parties in the industry, from writers and publishers to small bookstores, against this somber background.

“Because the parties have different interests, it was very hard to come up with an agreed measure. But a strong sense of crisis made a compromise possible,” Lee said.

Still, there are many who doubt whether price-fixing can turn around the industry.

Even the Korea Development Institute, a state-run think tank, warned in a recent research paper that the new scheme could backfire, dampening consumers’ already dwindling appetite for books.

Whatever the longer-term effects may be, one immediate result seems assured ― a market freeze.

For weeks, major book sellers have been slashing book prices by as much as 90 percent in a bid to clear out their inventories before the new measure takes effect.

On Thursday, one day before the Nov. 21 deadline, the website of Yes24, the largest online seller in Korea, crashed due to heavy traffic, as customers rushed to buy books in a last-minute shopping spree.