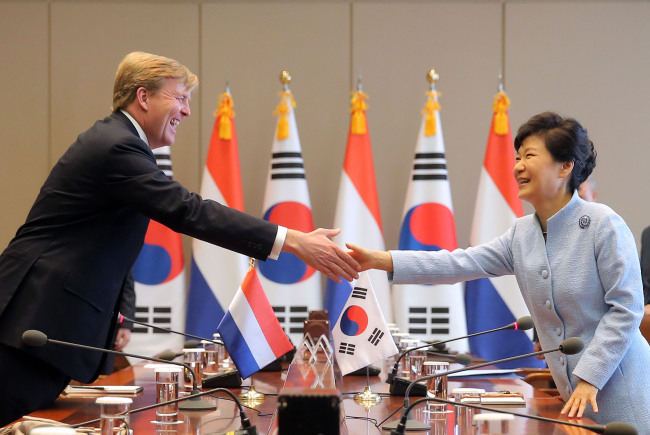 President Park Geun-hye shakes hands with Dutch King Willem-Alexander during their meeting at Cheong Wa Dae on Monday. Yonhap
South Korea and the Netherlands signed a deal to improve a Dutch atomic reactor Monday, marking the first export of the Asian country’s nuclear technology to Europe.

The deal was signed in the presence of President Park Geun-hye and Dutch King Willem-Alexander at Cheong Wa Dae. The Dutch King and Queen Maxima were in Korea on a four-day state visit.

Under the agreement, a group of South Korean companies are set to increase the capacity of a nuclear reactor at Delft University of Technology from 2 to 3 megawatts, and build a research facility to study cold neutrons by the year 2018.

Korean companies will start working on the project worth $23 million in May next year, officials said. A South Korean consortium led by the Korea Atomic Energy Research Institute was chosen as the preferred bidder in June, beating rivals from France, Germany and Russia, they added.

South Korea also signed a memorandum of understanding with the European country to boost cooperation on brain research.

The agreement signed between brain banks from both countries is aimed at promoting human resource exchanges to expand cooperation to study a variety of neurological and psychiatric disorders.

The signing ceremony was held after a summit between Park and Willem-Alexander in which they discussed ways to promote bilateral cooperation on a wide range of fields including science and technology, energy and the agricultural sector.

“More than 100 business delegates have accompanied (the king on this state visit),” Park said. “I hope this occasion can become a meaningful opportunity for businesses from both countries to expand their reciprocal cooperations,” she added.

Willem-Alexander also pointed out that the two countries have maintained a “strong friendship” for years and that the deal would help them to expand their business relationship.

In the closed-door meeting, the two leaders exchanged views on Japan’s wartime atrocities, including its sexual enslavement of Korean women and other Asian countries during World War II.

Park underscored the role of South Korea and Japan in promoting peace and stability in Northeast Asia, but said that Tokyo’s unapologetic stance over historical disputes have strained the bilateral ties.

“Korea and Japan are partners to promote the peace and the prosperity of Northeast Asia, but (the two) have been making efforts to resolve the issue of former sex slaves,” said Park.

Many soldiers and civilians from the Netherlands were taken prisoner by Japanese troops during World War II in Dutch-occupied Indonesia. A handful of Dutch women were also taken as “comfort women” at that time, according to testimonies by survivors.

During a royal banquet held in Tokyo last week, Willem-Alexander said that the Dutch people’s ordeal should not be forgotten and urged Japan to understand each other’s plan, calling it the foundation of reconciliation.

The royal couple’s visit to South Korea reciprocates Park’s visit to the Netherlands in March. The president then attended a luncheon hosted by the Dutch king on the sidelines of the Nuclear Security Summit.

The diplomatic and business delegates accompanying the king included Guus Hiddink, who headed the Korean national football team in 2002. Under the Dutch coach, the Korean team reached the semifinal of the World Cup for the first time in its history, making him a national hero at that time.