The inspection is in response to last week’s accident at a concert in Pangyo Techno Valley in Gyeonggi Province, in which a ventilation grate collapsed, killing 16 people and injuring 11 others.

Seoul Metropolitan Government officials will examine 10 ventilating systems in subway stations, service ducts, underground shopping districts, indoor parking lots and near outdoor concert halls. It precedes a citywide inspection on a total of 2,851 ventilating facilities, which will be completed by the end of this year.

Inspection teams will consist of experts in construction, architecture, power supply, appliance and fire services, along with civil servants. They will mainly focus on the overall conditions of the facilities including possible cracks or corrosion, whether the grates are fixed in place, and warning signs placed near them. 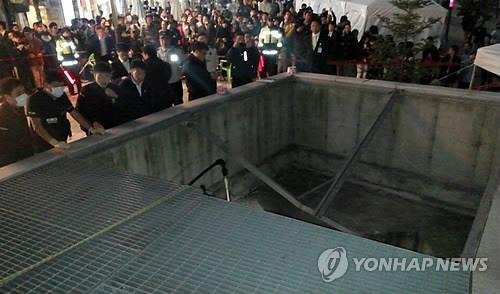 Officials inspect a ventilation facility at Pangyo Techno Valley in Seongnam, Gyeonggi Province, where more than 20 people fell from a 10-meter height while watching a concert on Oct. 17, 2014. (Yonhap)
City officials said the results of the inspection will be reflected in the updated safety manuals on maintenance of the cited facilities.

“Currently, all ventilation grates for subways and service ducts are to withstand 500 kilograms per square meter, but such a regulation does not exist for (such facilities of) regular buildings. This is why the related regulation needs to be updated,” a Seoul official said.

In addition, the city government will double-check the safety plans for 10 festivals that will take place from October to December in Seoul.

The categories for the inspection include: whether appropriate safety plans have been established, the conditions of the stages, possible hazards near the venue, escape routes in case of emergencies and whether a sufficient number of security personnel will be stationed at the event.

The Pangyo accident, which occurred Oct. 17, had sparked nationwide safety concerns about massive public events. While the ventilation grate in question could withstand a little less than nine people, dozens of fans at the concert stood on it without any of the organizers restraining them.

“(Organizers) clearly could have realized that people were very likely to get on the grate, due to the massive number of people at the event. But no safety measures were taken outside of public announcement,” said Rep. Lee Un-ju of the New Politics Alliance for Democracy. She pointed out that since the grate was only a meter high, almost anyone could have gotten onto it.

“The government should reestablish standards for ventilating facilities across the country,” Lee said.