[ The Korea Herald – Send E-mail ]
[Herald Interview] Breast cancer expert espouses gender-specific approach
Moon Byung-in shares his experience of treatment
By Claire Lee
Published : Oct 23, 2014 - 20:58
Updated : Oct 23, 2014 - 20:58
Even for Dr. Moon Byung-in, one of the most respected breast cancer specialists in South Korea, talking to his patients about their condition was not easy at first.

“Sometimes I wouldn’t know what to say and cry along with the patient (in my earlier years),” Moon said during an interview with The Korea Herald in his office at Ewha Womans University Mokdong Hospital.

“Even a patient in her 70s would break down in tears and sob when she was told that she may have to undergo a mastectomy. Being diagnosed with breast cancer can be traumatizing.”

Moon is one of the few doctors in South Korea who follows principles of gender-specific medicine ― a new way of looking at how human biology and physiology differ between men and women and how diagnosis and treatment of disease differs as a function of gender.

For example, a much higher number of women than men put off chemotherapy simply because they are “scared” or “overwhelmed,” while fully aware of the consequences of not receiving the treatment, he said.

“Not many male patients would choose not to get treatment for cancer simply because they are scared,” the doctor told The Korea Herald.

“They would rather get over with the disease however painful the treatment process is. But that’s not always the case for many women.” 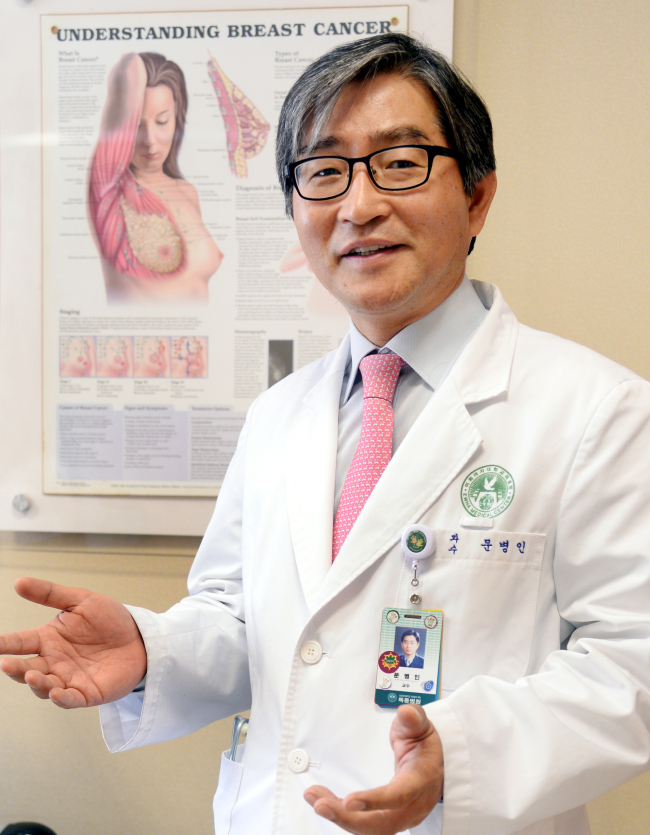 Dr. Moon Byung-in, who specializes in breast cancer, speaks to The Korea Herald in his office in Seoul on Oct. 16. (Park Hyun-koo/The Korea Herald)
Along with chemotherapy, treatment options for breast cancer are especially feared by women, as they may involve the removal of a breast, loss of hair or an altered physical appearance, as well as premature menopause.

Among many breast cancer patients who had been too scared to fight the disease before meeting Moon was a former nurse who had put off chemotherapy because the idea of losing her hair was so painful and overwhelming.

“When a woman patient is told in an unfriendly, blunt manner that she has cancer with all kinds of ‘scary numbers’ ― like what her survival rate is, and how many months she would be able to live, etc. ― the chances are she will be too overwhelmed or terrified to get the necessary treatment.”

Moon’s approach to breast cancer patients who are afraid of receiving necessary treatment is to talk about how their disease will affect their loved ones.

“I think that’s the major difference between men and women. Female patients are more easily persuaded (to be treated) when they are told that they should do this for their children, rather than do it for themselves,” he said.

“When I once told one of my patients that not receiving treatment could lead to death, she said, ‘I’d rather die (than go through the treatment).’ But most of the scared patients decided to get treated when they were told that this is important for their family, especially their children, and that they are very much needed in their children’s lives.”

Moon, who dreamed of becoming an architect until a close friend died of Crohn’s disease while he was in high school, is also active in educating his breast cancer patients’ families, as well as connecting survivors to patients.

“Survivor volunteers can offer so much,” he said. “Once the patients witness someone who has been in their shoes living a happy, active life, it just offers huge comfort and relief. Once they hear something like, ‘I went through exactly what you are about to go through and it all worked out,’ it just gives patients more courage to face the disease and fight it.”

The doctor stressed that even survivors need a couple of years to adjust to normal life after recovery.

“Many often think once a cancer patient is cured, she or he is back to normal.” he said. “But that’s just not possible. They may experience insomnia, depression and premature menopause.

“So a lot survivors get into conflicts with their families because their husbands and children often don’t understand that it takes time for the patient to get used to their lives after surviving cancer.”

In order to minimize the risk of breast cancer, Moon said it’s important to eat and sleep well, exercise, and to have a positive outlook on life.

“I encourage my patients to volunteer all the time,” he said. “We human beings are meant to feel fulfilled and happiest when we see someone else being happy because of what we can offer and give. Volunteering is one of the best ways to relieve stress.”