North Korea has released one of three American citizens detained in the communist nation, U.S. officials said Tuesday, a decision seen as a gesture of goodwill toward Washington amid stalled nuclear negotiations.

Jeffrey Edward Fowle, who had been detained since entering the North in late April, was on his way home after leaving the North, White House spokesman Josh Earnest said. The 56-year-old had been accused of leaving a Bible in a hotel.

Fowle is one of three American citizens detained in the North. 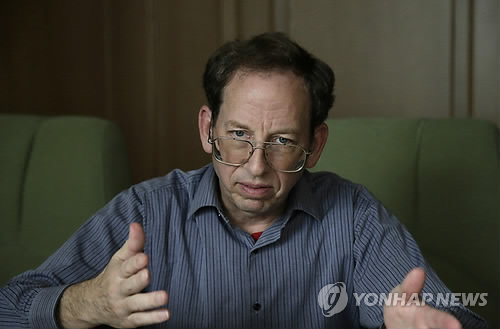 "We certainly welcome the decision from the DPRK to release him (Fowle)," Earnest said, referring to the Democratic People's Republic of Korea, North Korea's official name. "While this was a positive decision by the DPRK, we remain focused on the continued detention of Kenneth Bae and Matthew Miller and, again, call on the DPRK to immediately release them."

He added, "The United States government will continue to work actively on their cases."

As a condition of his release, Earnest said, the North asked the U.S. government to transport Fowle out of the country upon his release and the Department of Defense provided transportation for him in the time frame that was specified by the North.

Earnest also expressed gratitude for the efforts that the Swedish government put in to get Fowle released. The Swedish Embassy in Pyongyang acts as the protecting power for the United States as Washington and Pyongyang do not have diplomatic relations.

He declined to provide any further details.

It was unclear whether the U.S. and the North had negotiated Fowle's release or if the North was offered any concession from the U.S. in exchange for the release.

But State Department deputy spokeswoman Marie Harf said at a regular press briefing that she will "let the North Koreans speak for themselves about why they decided to do this, why now,"

strongly suggesting that the release was a unilateral decision by the North, not a product of negotiations between the two countries.

Harf also said Fowle "has been evaluated by a doctor and appears to be in good health."

The U.S. has long urged Pyongyang to release the three, saying their detention is a stumbling block to improved relations between the two countries amid long-stalled negotiations aimed at ending the communist regime's nuclear weapons program.

The widespread view has been that the North wants to use the three Americans as leverage to reopen negotiations with Washington.

Pyongyang has indicted such intentions, displaying the three before U.S. TV cameras in interviews where they asked their government in Washington to send a high-level special envoy to Pyongyang.

North Korea has long called for resuming six-party nuclear talks with the U.S. without any conditions. But the U.S. and South Korea have demanded Pyongyang first take concrete steps demonstrating it would be serious about giving up its nuclear program once negotiations restart.