Lili Luo, president and founder of TriBeluga, said the incubator will not only provide seed money to early-stage innovative start-ups, but also help them grow via initial public offerings or mergers and acquisitions, two key factors that determine the success and sustainability of start-ups.

“Our goal is very long-term, to one day help launch IPOs somewhere, and M&As would definitely be part of the strategy,” Luo told The Korea Herald on Thursday.

“We cannot limit ourselves to a box, but have a long-term open mind. Who knew Alibaba (Chinese e-commerce company) was going to list on Wall Street?” 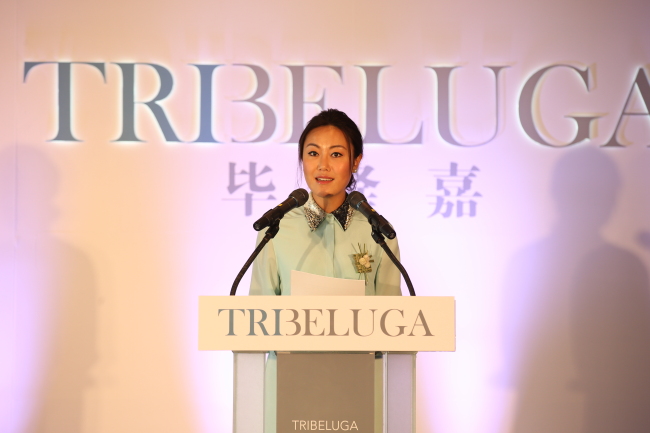 TriBeluga president Lili Luo makes a keynote speech to commemorate the opening of its start-up incubation center in Seoul on Thursday. (TriBeluga)
Luo came to Korea to launch an incubation program and open its first center in Seoul tailored to Korean start-ups that seek to improve the environment, health care and education worldwide, including in China through innovation and technology.

The center aims to connect Korean entrepreneurs with Chinese and Silicon Valley investors, and its long-term plan would include providing support for start-ups to possibly list not only in Korea but also in the U.S. and China.

“We need to gather all the strength from different parties, and maximize it together and back each other,” she said.

The center will also provide advice on how to get business done in China through mutual trust and respect.

Luo said that entrepreneurs have to see China not only as one big market, but also a culturally-diverse market that has 56 languages in different regions with different demographics, rules and culture.

The reason 85 percent of foreign companies failed in China is because they saw China as a one big market.

She added that its ultimate goal is to share knowledge and value with entrepreneurs and investors, and that geographically, Korea offers that kind of opportunity as a bridge for Seoul, Beijing and Silicon Valley to closely interact and build a sound business ecosystem.

“This is the peak of friendship between the two countries,” she said, adding that both governments have to promote and support Chinese and Koreans to invest in other areas beyond their current interests including real estate.