[ The Korea Herald – Send E-mail ]
[Herald Interview] ‘Time to change outdated education system’
By Yoon Min-sik
Published : Oct 13, 2014 - 21:22
Updated : Oct 13, 2014 - 21:53
Throughout his life, Cho Hi-yeon has always had a reputation as a fighter. During his college years, he was imprisoned for going against the dictatorship of former President Park Chung-hee, and he spent much of his life as a civil rights activist. Indeed, he was one of Korea’s most outspoken progressive advocates.

Now, the 58-year-old Seoul education superintendent is looking to transform the city’s education system through offering equal opportunities in learning.

“I believe that the competition-based education system of the ’60s and ’70s is outdated,” Cho said during an interview jointly conducted by The Korea Herald and The Herald Business, criticizing the system for forcing students to rest as little as possible while poring over textbooks. “Korea’s current education (system) has virtually become like child-abuse.” 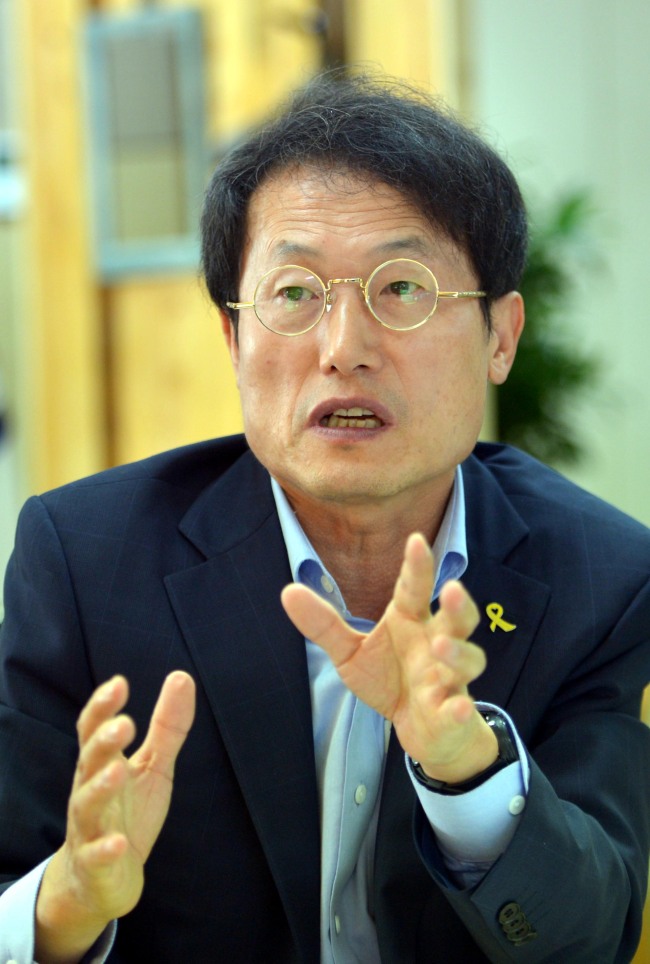 Seoul Education Superintendent Cho He-yeon. (Kim Myung-sub/The Korea Herald)
Rather than pushing students to just work hard, the newly transformed education system would be about fostering children’s creativity by giving them sufficient time to rest and play. He said it was essential for educators to try to maximize the potential of each student, not just focus on those whose grades are good.

Since taking helm of the Seoul Metropolitan Office of Education in July, Cho had vowed to pursue his goals by tacking what he called the “crisis for regular high schools.”

“Half the students in our middle and high schools are sleeping during classes, which is a severe crisis,” he said. “This calls for talks on fundamental change, but we are too accustomed to this situation to realize its severity.”

“Their thought process is simple: ‘Our wealth caused us to lack discipline. Let’s push ourselves like we used to.’ This was their definition of progress,” he said. “We need to revamp the system itself to abolish the inequality, which is the true meaning of progress.”

The focal point of his criticism concerns the country’s autonomous private high school system, which was introduced by the Lee administration and is one of the flashpoints in the standoff between the egalitarian-based progressives’ views and competition-based conservatives’ views in education circles.

“In addition to the existing hierarchy of grades, autonomous private high schools made another hierarchy of schools where each students receives a different quality of education based on his or her financial status,” he said. “The public education system should provide quality education for all citizens at least until each one finishes high school.”

But Cho’s bid to eradicate what he claims to be discrimination was met with fierce opposition from civil rights groups and parents of students attending autonomous schools. The SMOE is also engaged in a battle with the Education Ministry over who has the final say in stripping private high schools of their autonomous status

The experience made Cho realize that he needs to devote as much time to listening to his foes as he does to his friends. It is one of the changes he has had to accept during the transition from scholar and activist to administrator.

Among the autonomous schools facing the axe is his alma mater Choong Ang High School, which Cho pointed out as proof that he aims to pursue the public interest, a lesson he learned from his mentor the late Kim Jin-kyu, a former professor of sociology from Seoul National University.

“He told us to seek what’s best for the society rather than individual gain ... (This was) the sense of justice for me and other students of sociology during the 1980s,” he said.

Cho claimed that despite his sincerity, factional divisions within the education circles were preventing his message from getting through to his opponents. He said he was mulling ways to be more flexible and listening to both sides to settle their differences.

Although in the past Cho faced an abundance of challenges, just a little over three months into his term he is no stranger to hardship. When he was expelled from SNU and went to prison in the late 1970s after speaking out against the Park Chung-hee regime, he felt that he was “lost.”

“My father would say, ‘What will you do for a living? Won’t you end up harassing relatives for the rest of your life?’” he said. But as fate would have it, the Park administration ended within months, and Cho went on to become an influential figure in the civil rights movement. He is now in charge of education in a city of 10 million.

Though his current position may not have been what he expected in the past, Cho said that he was “accepting fate,” transforming himself from a civil rights activist to an education chief of the nation’s capital. “Right now, I’m living the second phase of my life,” he said.