[ The Korea Herald – Send E-mail ]
[Herald Interview] ‘Korea should no longer expect trickle-down effect’
By Seo Jee-yeon
Published : Oct 5, 2014 - 21:04
Updated : Oct 6, 2014 - 10:11
South Korea should no longer expect a “trickle-down” of benefits from conglomerates and the rich to small companies and low-income earners, a local economics professor said, urging the government to seek a paradigm shift in its growth strategy.

Korea has been considered a model country of “condensed” economic success from the ashes of the Korean War within a half century, heavily leaning on the spillover effect from the growth of conglomerates.

“Big-businesses-friendly economic policies with an aim of creating more jobs and higher economic growth don’t work in Korea anymore,” said Yoo Jong-il, a macroeconomics professor at state-funded KDI School, in a recent interview with The Korea Herald. “With automation and outsourcing accelerating, their contribution to the economy will no longer be huge.” 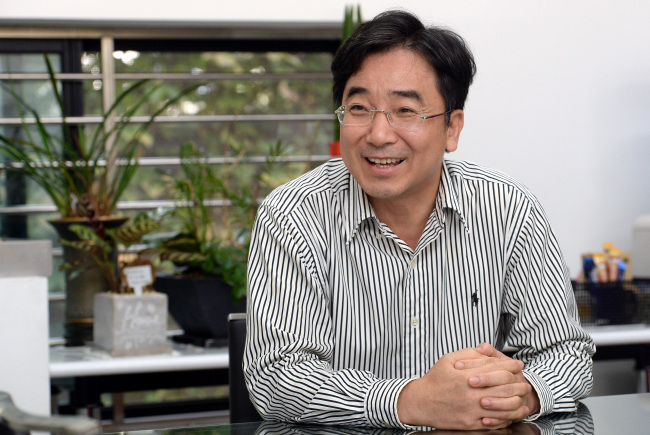 Korea’s wealth distribution has continued to polarize over the years. In 2012, South Korea’s top 1 percent made 12.2 percent of the national income, which is the second-highest in the Organization for Economic Cooperation and Development, only after the United States’ 19.3 percent.

“The government should consider levying more taxes on conglomerates to make the economy fairer and more transparent,” he said.

Yoo agreed with French economist Thomas Piketty’s idea that the government should adopt a wealth tax and raise income taxes on big business groups to spread the wealth.

He refuted the argument that higher taxes on conglomerates would discourage their investment and limit the nation’s economic growth.

“Despite big business-friendly policies over the past decade, the quality of life for average households and economic conditions have not improved,” he said.

He called for more regulatory intervention in leveling the playing field for economic players ― labor and management, large and small companies, and full-time and temporary workers.

“It is more important to solve the economic polarization issue to bring the domestic economy out of the doldrums. For this, the government should be more favorable to the nation’s low and middle income groups such as labor, subcontractors and temporary workers rather than big business groups,” he said.