[ The Korea Herald – Send E-mail ]
[Herald Interview] WWF calls for ‘greener’ Korean economy
By Shin Hyon-hee
Published : Oct 1, 2014 - 21:39
Updated : Oct 1, 2014 - 21:39
With its persistent overconsumption and energy-intensive industry, Korea should step up efforts to curb its ecological footprint by “greening” its economy and adopting environmentally sustainable practices, the head of the Korean chapter of the World Wide Fund for Nature said.

The Gland, Switzerland-based nonprofit organization launched the Korean edition of its flagship Living Planet Index on Wednesday. In the biennial report, it said the populations of more than 10,000 species of mammals, birds, reptiles, amphibians and fish have declined by 52 percent since 1970.

On a country level, Korea needs 2.5 Earths to meet its demands for natural resources and ranks 31st on the WWF’s ecological footprint list of the 152 countries with populations of at least 1 million.

“The main message about this report is that we’re overconsuming ― we’re producing in a way that is not sustainable,” Jean-Paul Paddack, cochairman of WWF Korea, said in an interview with The Korea Herald on Tuesday.

“We need to change the way we’re using natural resources. Today we’re using the equivalent of 1.6 planets in a year (worldwide). It’s not something that can be sustained for a long time.” 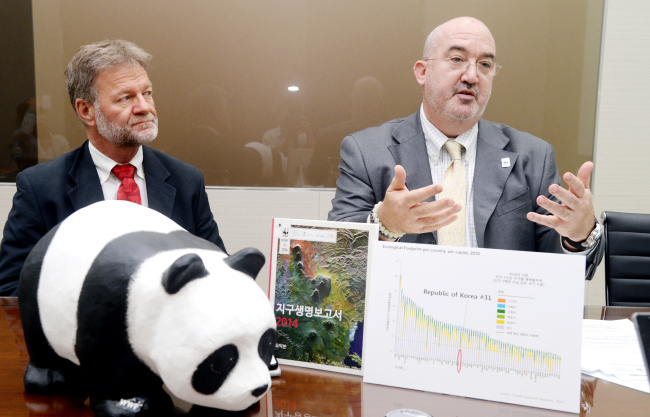 Jean-Paul Paddack (right), cochairman of the Korean unit of the World Wide Fund for Nature, and Richard McLellan, director of footprint at WWF International, speak during an interview with The Korea Herald on Wednesday at their office in downtown Seoul. (Park Hyun-koo/The Korea Herald)
Richard McLellan, a WWF International director in charge of the study, said “greening the economy” is key to reducing the ecological footprint.

“Korea is a small country on a global scale, but I think it’s got the huge opportunities for leadership in some of the areas where we can have technological development,” he added, citing energy use, transportation and urban planning.

Best known for its signature panda symbol and the “Earth Hour” campaign, the organization set up its Seoul chapter in March. While carrying out some 1,300 conservation projects in about 100 countries, here it focuses footprint-related areas such as climate change, renewable energy, sustainable fisheries, sustainable consumption, species conservation and wildlife trading.

Korea has the fastest-growing participation in the Earth Hour initiative, with more than 2 million households switching off their lights on March 29, Paddack said.

This year Seoul, Suwon, Pyeongchang and four other cities are taking part in the Earth Hour City Challenge, in which 152 cities around the world develop and showcase their ambitious emissions-cutting schemes. Seoul was among the finalists last year.

“The WWF, at a global level, really aims to try to make sure that humans can live in harmony with nature. That is really our overall objective. And it’s the same objective here in Korea,” Paddack said.

While working with central and local governments, academia and other NGOs, he pinned high hopes for cooperation with international organizations here, especially the Global Climate Fund and the Global Green Growth Institute.

In line with surging demands, he aims to expand his workforce from the current six to 10-15 over the next three to five years.

“We think that one of the particular roles we can play is working on these footprint issues, particularly all of the sectors that are producing or emitting carbon,” Paddack added.

“We’re also here to try to listen to the voices of Koreans and what they would like to see happen in Korea, so we have a joint agenda.”