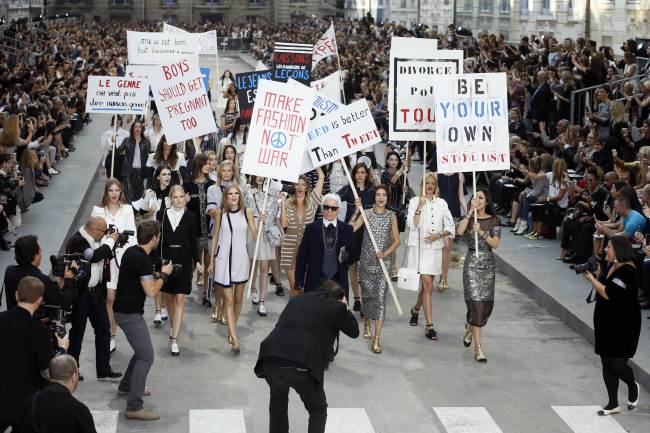 Fashion designer Karl Lagerfeld (center) acknowledges the public along with models faking a demonstation as they present creations for Chanel during the 2015 spring-summer ready-to-wear collection fashion show on Tuesday at the Grand Palais in Paris. (AFP-Yonhap)
PARIS (AP) ― They were styles literally made to be worn on the street. But not just any street: this was Chanel’s boulevard.

Karl Lagerfeld did it again Tuesday, producing the most outlandish and expensive ready-to-wear show of the season by reconstructing an entire Parisian neighborhood inside the Grand Palais.

Guests, including director Baz Luhrmann, gawped as they entered the set: a boulevard with pedestrian crossing surrounded by towering 19th century trompe l’oeil apartments. There were 3-D verandas, and even real puddles that shimmered in the dazzling camera flashes.

“His shows are great opera,” said Luhrman, quipping ironically that the Chanel showman only does “very small productions.”

One fashion insider was overheard saying that the only thing missing from the Parisian realism was some pedigree dog waste on the sidewalk.

But this is Chanel, darling, and instead there were perfume bottles on the seats.

There were also some clothes.

The spring-summer look was all about color, and mixing up masculine and feminine codes.

A double-breasted tweed jacket opened the 88-look show, with a multicolored tie and dappled blue tweed.

“The artist is myself ― without wanting to be pretentious,” said the larger-than-life couturier.

“I made a watercolor of flowers and then enlarged it,” he added.

There was also some enviable silver looks, with scale-like texture, like on a column dress or a shoulderless ’80’s-looking mini dress with black tulle.

There were perhaps too many styles, and with the myriad colors, the focus seemed at times blurred.

Still, the striped section was great, showcased to “oohs” and “aahs” by uber model Gisele Bundchen. A model of her ilk rarely does runway, and she wore a pale green look with trendy shoe socks and a “CC” across the bust.

At the end of the show, all the models, including it-girl Cara Delevigne, filed out in a group in a feminist mock protest.

Gisele, holding a loudspeaker next to placards reading “Women First” and “Divorce for everyone,” caused much chuckling from the fashionista-filled sidewalk.