The collections being previewed during Milan fashion week, in its fourth day Saturday, are easy to wear and roomy, not binding, meant for every day and not rarified occasions.

Here are some highlights from Saturday’s shows:

The art short, titled “Sand,” formed a backdrop for the Armani collection inspired by Mediterranean sands both in its colors ― powdery gray, rosy white, pearly beige, lava black ― and in the undulating motion created by the light, often translucent, textiles.

The collection projected a modern, urban feel, united by fluid silhouettes and rich but diaphanous textiles.

As the looks unfurled down the runway, another theme emerged, one of constant cultural flows among the peoples of the Mediterranean rim and the role of the sea, where in recent months migrants have died as they flee strife for safety in Europe. 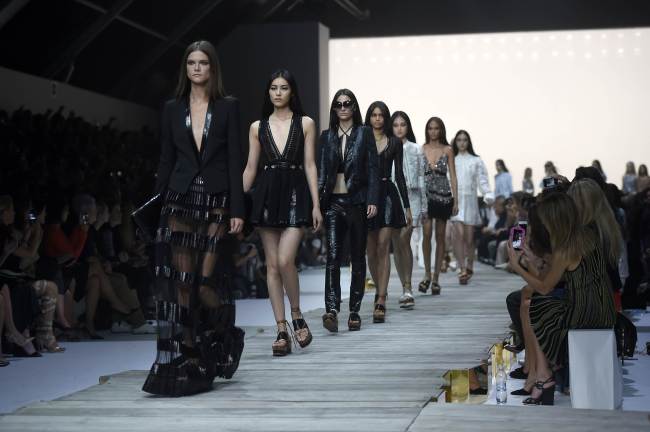 Models present creations from the Roberto Cavalli collection during the 2015 Spring-Summer Milan Fashion Week on Saturday in Milan. (AFP-Yonhap)
In Sorrentino’s film, a man and a woman lie on the beach coiled in rope, holding hands.

Was he intentionally referring to the record flow of humanity this year toward Italy’s southern shores? “Indirectly, perhaps yes,” said the filmmaker, who won the foreign-language Academy Award this year for “The Great Beauty.”

Rodolfo Paglialunga didn’t consult the archives to make his debut collection for the Jil Sander label. He didn’t have to.

“I knew very well Jil Sander because I grew up looking at her. I didn’t want to make a copy of a Jil Sander look,” Paglialunga said backstage after the show. “I didn’t think minimalist or not.”

The looks were androgynous with strong references to school uniforms in both form, with sturdy materials, and in mascot-friendly colors like maroon, navy and sky blue.

Paglialunga redefined minimalism in the clean lines. Long blouses were tucked into high-waisted belted skirts, wide pants doubled as skirts, jumper dresses were slit open to reveal the hem of a shirtdress.

The fashion crowd was appreciative, applauding wildly for curtain calls.

Evolving from a dancer’s wrap, the latest styles from Bottega Veneta put a premium on a woman’s freedom of movement.

Creative director Tomas Maier used everyday materials like denim and gingham, embellished with sequins and beads. Sheer mesh overlays, from the tulle used in a dancer’s tutu, added mystery and movement to the looks.

Maier said in his show notes he was inspired by a woman “who has beautiful posture, moves her arms gracefully and has a dancer’s walk.”