This Sunday, households will be busy crafting songpyeon, half-moon-shaped rice cakes, and other delicacies to offer up to ancestors in appreciation of a good harvest this coming Monday morning.

Those ceremonial tables, loaded to bursting with carefully prepared food, will vary from home to home, serving as edible symbols of the foodways of each family, of their hometowns and provinces of origin.

The regional diversity of Korean cuisine plays no small role in influencing what food is put on the ceremonial table.

From Gyeonggi Province and Seoul to Gangwon Province; the Chungcheong, Jeolla and Gyeongsang provinces; and Jejudo Island, families will be paying tribute to their own regional culinary traditions by offering up the cuisine of their birthplaces to their forefathers.

In Seoul, according to 9SPICES CEO and Ssalgage owner-chef Hong Shin-ae, meat-based dishes take up a lot of space on the Chuseok table.

Celebrity food stylist and researcher Hong, who heads her own cooking studio and hansik restaurant, hails from Seoul.

“Like other households, we knead songpyeon and make taro root soup,” Hong, 38, said in an email interview. “We make fish pancakes, grilled fish and then braised dried pollack, but the majority of the dishes tend to be meat-oriented like bulgogi, galbi jjim and Korean meat patties.” 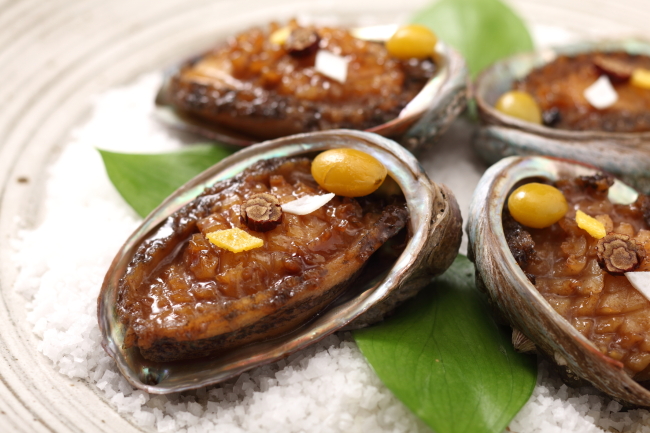 On Jejudo Island, abalone, like the braised ones pictured here, are often prepared for Chuseok.
In contrast, tilefish and abalone are staples on Jejudo Island, Hong revealed, a natural outcome, it appears, of the abundance of fresh seafood in the region.

Seafood, however, is not the only delicacy on Jejudo Island ― myoga ginger, according to “Amusing Story about Korean Traditional Festival Foods” (2009), is another ingredient traditionally used during Chuseok.

In Gangwon Province, rice cakes and other food made from corn, buckwheat, potatoes or yams are put on the ceremonial table, Hong said, while Chungcheong Province is famed for its whole cooked chicken.

Being relatively closer to the ocean, families from both the Gyeongsang and Jeolla provinces tend to mostly prepare seafood dishes, according to Hong.

“Our elders have said that in the Jeolla provinces, in particular, fermented skate is a must,” Hong said.

Le Chamber co-owner-bartender Lim Jae-jin, who was born in North Jeolla Province’s Gochang County, confirmed this, stating, “I believe that a seasoned skate dish is always put on the ceremonial table.”

The star mixologist recalls the fermented skate stew that his mother would make for Chuseok. 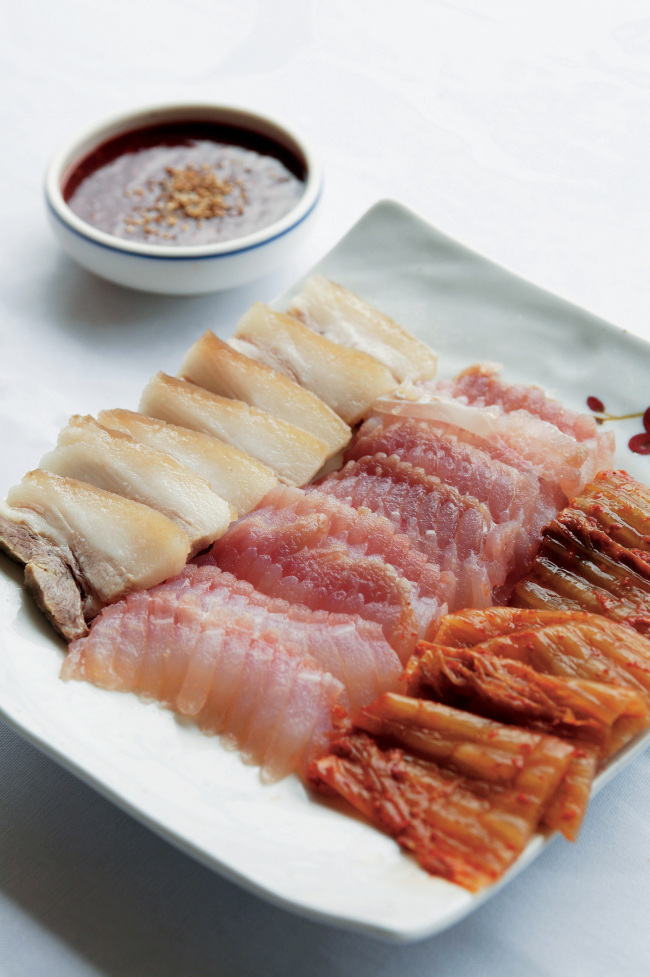 In the Jeolla provinces, fermented skate, which is pictured here with steamed pork slices and kimchi, is a Chuseok staple.
“It’s very refreshing,” said Lim, 32.

While serving skate is a tradition of the Jeolla provinces, octopus, according to Shy Bana and Bana 1924 CEO Jay Song, is customary in his native Busan.

“One whole octopus is blanched, then placed on its head, with its eight legs shaped like the bud of a flower, on a plate,” restaurateur Song, 43, said in a phone interview. 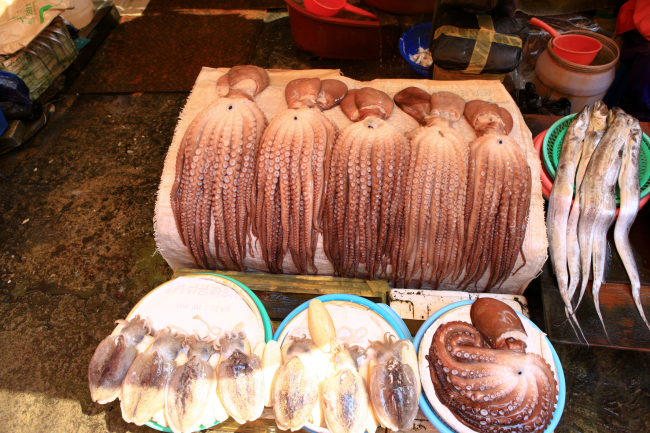 Whole octopus, like those pictured here at the famed Jagalchi Market, is customarily prepared for Chuseok in Busan. (Korea Tourism Organization)
Song went on to explain how mussels are also customary in his hometown.

Not all cities and counties in the Gyeongsang provinces, however, prepare a large amount of seafood for Chuseok.

According to Haap owner-chef and Uigitu Haap executive chef Sin Yong-il, “not a lot of seafood dishes” are prepared in his native Daegu.

While regional customs influence how each household prepares for Chuseok, family traditions play a key role in the experience, according to Sin, who revealed that his family places tea instead of the customary wine on the ceremonial table.

“Each household’s individuality is very strong,” Sin, 41, said, recounting his own experiences with a certain fondness, suggesting that Chuseok is a special day that holds a unique place in each person’s heart.