[ The Korea Herald – Send E-mail ]
[Weekender] Early Chuseok advances harvesttime
By Lee Woo-young
Published : Sep 5, 2014 - 20:41
Updated : Sep 5, 2014 - 20:41
JANGSU, North Jeolla Province ― This year’s Chuseok, Korean Thanksgiving Day, falls in the second week of September, the earliest in 38 years. Chuseok, one of the major traditional Korean holidays, celebrates the fall harvest and abundance on the 15th day of the eighth month of the lunar calendar. The moon is said to look fuller on Chuseok than on any other day.

But the early Chuseok this year has advanced the harvesttime and delivery start for products and gifts by two weeks to a month. Chuseok usually falls in mid-September or October.

Last week in Jangu, North Jeolla Province, dozens of workers were busy packing apples fresh from Cheonhyangwon Apple Farm to supply them ahead of Chuseok. Apples are some of the most popular Chuseok gifts and also a must-use item for ancestral rites as a token of gratitude to ancestors for the year’s harvest.

The apple farm expects some 12,000 boxes of apples to be delivered nationwide in time for the Chuseok holiday.

“Apples are usually harvested from late September to November. At first, farmers worried that apples would not ripen in time for Chuseok this year, but the timing turned out well. The apple trees blossomed a week to 15 days earlier than usual, which set the harvest time to fall just before Chuseok,” said Song Jae-gi, owner of Cheonhyangwon, which covers 15 hectares of land. 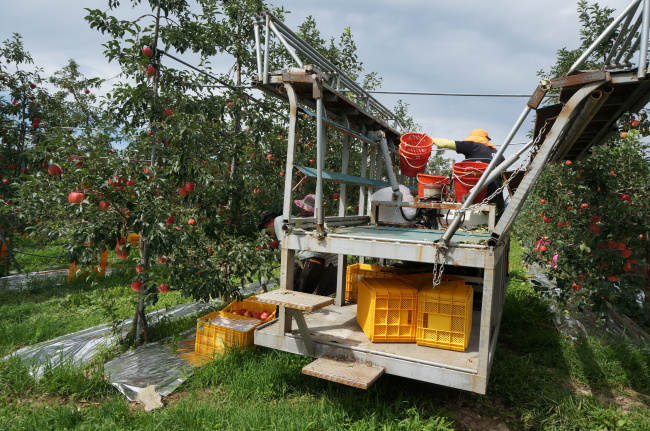 A worker picks apples at Hunhunhan apple farm in Jangsu, North Jeolla Province, before the Chuseok holiday. (Lee Woo-young/The Korea Herald)
Jangsu, a small town in North Jeolla Province, holds a local food festival just before Chuseok to lure customers looking for quality Chuseok staples ― apples and hanwoo, Korean beef. Jangsu Hanurang Sagwarang Festival celebrates the two most popular products for the holiday for two weeks before Chuseok. The small town with a population of 23,000 welcomes around 320,000 people who visit there to prepare a Chuseok feast and buy gifts for family and friends.

“The demand for Korean beef soars right before Chuseok, as well as for ‘hongno’ apples too,” said Cho Jang-ho, an official of Jangsu district office. Jangsu is a major producer of hongno apples, which are always harvested shortly before Chuseok. It is a top-quality apple variety widely preferred as ritual food for Chuseok.

Kim Jin-sang from Obong Apple Farm said that apples sold during the three-day festival account for 30 percent of their annual sales. He expected his farm to earn 20 million won to 30 million won ($19,700-$29,500) over just three days.

Hanwoo beef has been considered one of the most favored Chuseok gifts, but this year, things are a little different. Customers have been expressing concerns that the expensive gift might spoil during delivery due to the warm weather.

The festival was crowded with visitors from throughout the province who came to buy fresh local beef.

“I came to buy bones to make beef bone broth for Chuseok, as well as some meat to cook and eat with my family. I think the beef is sold 50 percent cheaper at the festival than at local supermarkets,” said Lim Young-ja, a visitor to the festival.

Normally during the festival and Chuseok holiday, some 700 heads of cattle are consumed.

“The festival promotes one of the top-quality cattle (breeds) raised in the unpolluted nature in Jangsu. The Jangsu Hanwoo Local Corporation manages the quality of the meat by monitoring and developing superior breeds.”

The early Chuseok has served as a stimulus to the sluggish local economy, which has been hit by depressed local tourism since the April Sewol ferry disaster.