As expected, all government organizations and most large companies will observe the extra holiday, whereas many small and medium-sized businesses cannot afford to offer a day off, to the dismay of their employees. 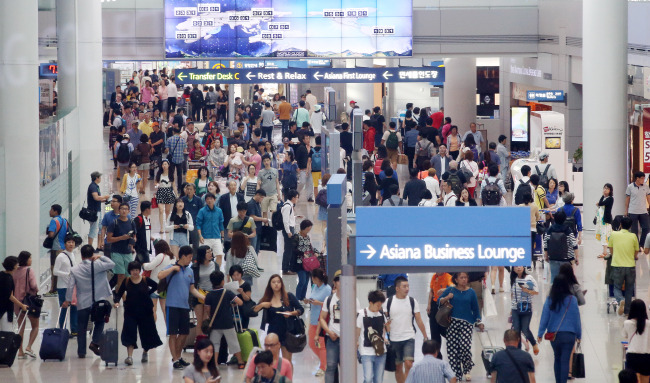 The departure terminal of Incheon International Airport is crowded with travellers on Thursday. About 900,000 people are expected to leave the country during the five-day Chuseok holiday. (Yonhap)
The upcoming Chuseok holiday falls from Sept. 7-9, Sunday through Tuesday, resulting in Sept. 10, Wednesday, becoming the substitute holiday, according to the newly revised law that took effect last November.

In spite of the change, not everyone will be enjoying an extra day off as the system is only mandatory for government organizations.

The government, nevertheless, expects a similar system to be applied within the private sector based on individual companies’ capacity and labor-management agreements.

When asked whether they will designate Sept. 10 as a substitute holiday, 564 of 1,115 companies (50.6 percent) said they will give workers the day off, according to a survey conducted by job portal Saramin at the end of August.

But for small and mid-sized companies the situation is quite different.

As the substitute holiday is regarded as paid vacation, it becomes a financial burden for already budget-constrained companies, industry experts say.

“Wednesday is not a break for me,” said Chung Seung-sup, who works for a small IT company. “I wish it was an official holiday so we could all rest together rather than some of us having to work. But our company has deadlines to meet by the end of the week.”