“Too many concerns over security online may hamper the mobile massenger payment market in an infant stage of growth,” Kim Yeong-rin, president of the Financial Security Agency, told The Korea Herald in a recent interview.

His remark came amid growing security concerns over the financial services to be offered by the nation’s most-used mobile messenger, Kakao Talk. 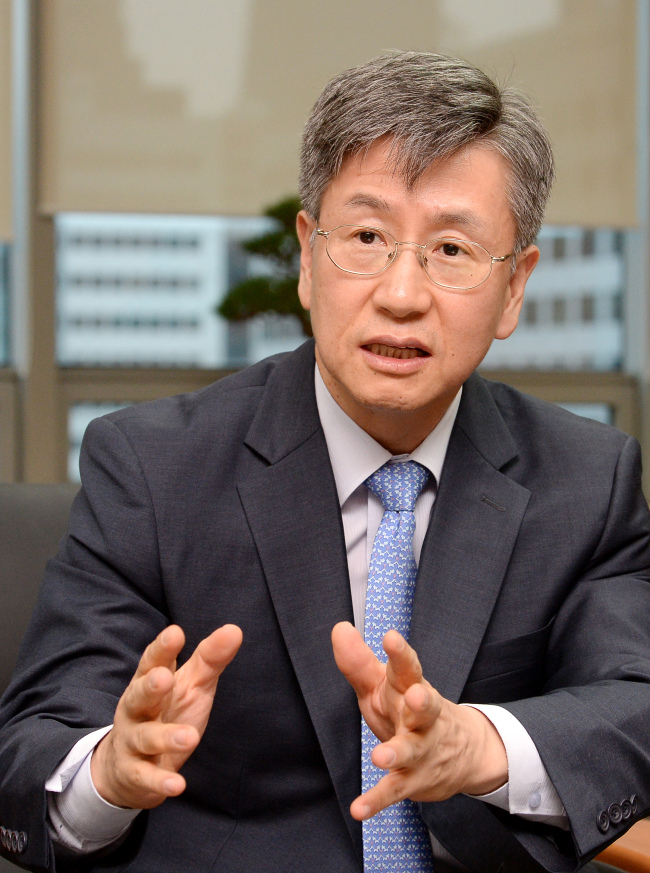 Kim Yeong-rin, president of the Financial Security Agency. (Ahn Hoon/The Korea Herald)
The company is scheduled to unveil its new mobile banking services in partnership with 14 commercial banks and seven card companies in September. When the services debut, Kakao users will be able to create an account through which they will be able to wire money and buy goods.

“Regarding the issue, it is too early to worry about security issues of mobile payments as the market is in an initial stage of growth,’’ Kim said.

“At this moment, strong security-related regulations may hamper market growth,” he said.

Instead of regulations, preventive safety measures such as the Fraud Detection System, which Paypal and Alipay have already adopted, are recommended to ease security concerns, he said.

The FDS is a system which detects unusual transaction patterns. For instance, if the same card is used in two different countries within a few hours, the system recognizes the irregularity and stops the transaction.

Last month, the FSA drew up guidelines on the FDS technology and distributed them to over 130 financial institutions that have adopted online payment systems, including banks and card companies.

“In addition to the development of security technologies, it is also important to improve security governance,’’ the FSA chief said.

“Currently, if an online security-related accident occurs, only a chief information officer of a company tends to take responsibility. But the practice has to be changed,’’ Kim said.

“Top decision makers of a company, including the CEO, board members and audit committee, have to take responsibility for security-related issues online.”

For mobile payments via biometric technologies, the privacy issue is even more serious, he said.

Synaptics, a human interface solution provider, has recently said it would unveil a new service which allows users to make financial transactions via fingerprint sensors as early as next year in partnership with other Fast Identity Online members, which include Paypal, MasterCard, Bank of America, Microsoft, Google and Samsung Electronics.

Because of the uniqueness of biometric information such as fingerprint or iris patterns, information leakages may lead to bigger damages to users than those of mobile payment systems.

“It is critical for the government and IT companies to make joint efforts to prevent possible security issues,” he said.