According to Moody’s, a global credit rating agency, a total of 13 countries including Korea will be categorized as “super aged” societies by 2030, meaning that more than one-fifth of the population will be over the age of 65.

Last year, more than 12 percent of Korea’s 50 million people were in this age bracket.

The impact of such aging on the global economy would be tremendous, Moody’s said, predicting that global economic growth would fall by 0.4 percent annually from this year until 2019. After 2020, the rate is expected to decline by 0.9 percent every year. 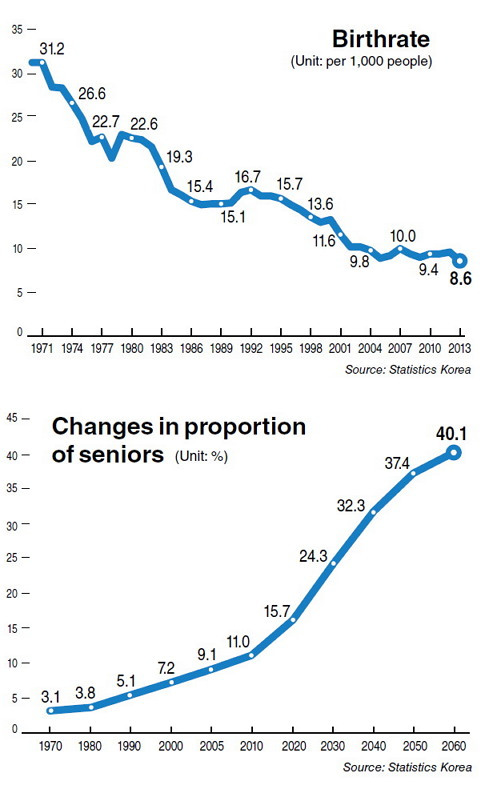 The Park Geun-hye government, however, seems to be oblivious to such effects.

Seoul currently lacks effective policies to fight societal aging, as the only specific plans it has announced so far are social security increases for senior citizens. This was a part of the government’s three-year economic innovation blueprint that was unveiled early this year.

The government committee to combat the low birthrate and aging society has also failed to meet for more than a year, and critics say the administration needs to allot more personnel to tackle the issues.

According to Seoul National University’s Center for Social Sciences, Korea tanks at the bottom of 22 Organization for Economic Cooperation and Development member countries on an index for responding to societal aging.

Although the government has introduced a new pension for senior citizens, and has in place a number of projects aimed at creating jobs for seniors, their supposed beneficiaries appear far from satisfied.

“President Park Geun-hye won the election with a pledge to give all seniors 200,000 won, but in the end she took it away,” Choi Ja-woong, chief of Korea Association of Community Senior Club, at a rally protesting the government’s plans for senior job creation program.

The government plans to transfer such projects to local governments.

“Korea will fall if (the country) turns its back on the seniors here today, who endeavored to make this country into a prosperous developed nation.” 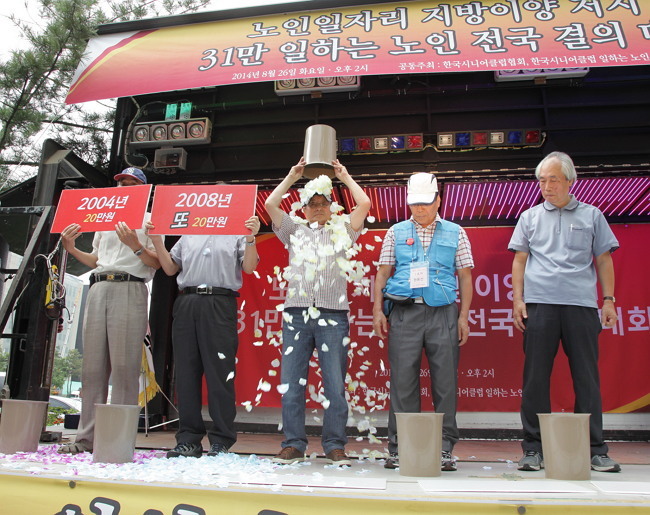 Members of the Korea Association of Community Senior Club protest the government’s job policies forseniors in central Seoul on Tuesday. (Korea Association of Community Senior Club)
Experts say that the root of the problem lies in the way society views seniors and the government’s focus on easily noticeable measures that effectively treat seniors as charity cases.

According to professor Park Hyun-sik of the senior welfare department of Hoseo University, Korea’s senior welfare policies are superficial and populist. Park also points out that seniors must not be viewed as a group that has negative social effects such as an increased burden on the economically active population.

“If seniors are considered as those who created today’s society, we must approach the issue from the perspective of how to recognize the value of their existence,” Park said. He said that since senior policies became a major issue in 2005, Korean politicians have focused on rolling out easily noticeable measures such as building senior centers, which have few real benefits.

“(Policies) need to focus on the resources (seniors) have, such as cultural assets and the experiences they built up during Japanese colonization and the Korean War, to establish a (social) structure that recreates their knowledge and experience,” he said.

Some think tanks have suggested creating social contribution jobs for the elderly so that they may share their expertise and know-how with the younger members of society.

The main aims of these steps would be to contribute to both the economy and to reducing crime committed by senior citizens who feel that society has left them behind.