The life expectancy for South Koreans born in 2012 is 81, according to the

World Health Organization. The figure is expected to reach 100 in the coming years.

For some, the answer to figuring out what to do with this extra time comes naturally.

Kim Kwang-whi, now 72, says working after retiring was the logical next step.

“Writing was the only thing I knew how to do. And it had always made me happy,” said the former scriptwriter for MBC, a national television broadcaster. “Why stop?”

Kim launched his fourth career as a full-time freelance writer at 64, after retiring from his job in television and radio in 2006. His latest novel, “Quy Nohn,” describes the annals of a South Korean Army unit that fought in the Vietnam War.

In fact, Kim’s first job was with the South Korean Army during that conflict.

The 24-year-old entered the Army after graduating from college in 1965 and went to Vietnam as an artillery forward observer with the Tiger Division, returning home in 1967. He then began teaching Korean literature at secondary schools across Seoul before beginning work as a television scriptwriter in 1979.

When the time came to clear his desk at MBC at the age of 64, he simply rented a private office on the other side of Seoul and began to work as a full-time freelance writer.

Retirement for others came earlier than expected.

Kim Young-gee, now 60, retired unexpectedly from his job at 41.

“I was faced with the stark reality that I could actually die,” he said, after being diagnosed with leukemia in 1995. 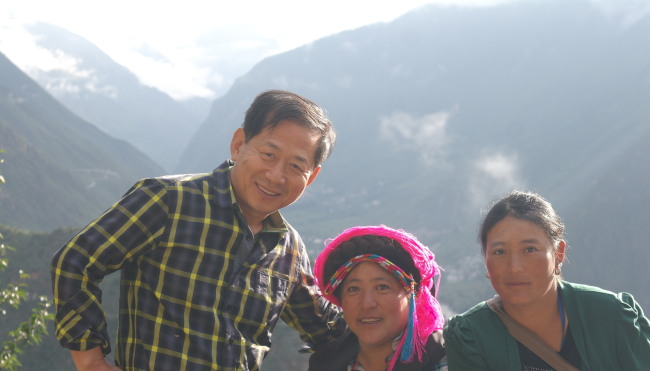 Kim Young-gee (left) poses for a photo in Danba, Tibet.
After two years of fighting the disease, he finally won. He was healthy again.

But leukemia had cost him his job, millions of won and what many call the most precious commodity in life ― time.

So Kim decided it was time to start living. Enjoying life, as he calls it. Kim went to beaches, resorts and tourist attractions across Asia, Europe and South America.

“But, I think it was about in 2003. I was standing there at some beach, and I started feeling a sense of guilt.”

“I felt a bit extravagant just spending my time idly, and visiting all these wonderful places,” he said.

“I loved hiking. It had been a personal passion since high school. And I thought, why not help others while hiking?”

Kim’s goal was to visit mountains around the world, and donate small items to residents of distant villages. Most recently in the Himalayas, he stopped by a hamlet in Danba, Tibet. He gave local students small pens and old clothing he and his children no longer use.

“It’s really nothing, but usually (the villagers) love these small gifts.

“It makes me feel alive, after all these years. It’s wonderful hiking, trekking up mountains and seeing others smile at me when I give them things.”

Kim is not a rich heir. His wife is the family’s primary breadwinner, while he funds his travels with small sums earned from renting out a small apartment he bought with his severance pay in the late 1990s.

The trips give Kim a sense of purpose.

“I have to stay in shape before going on these trips. So I’m motivated to work out, while I also have to study maps, (learn) local languages and save money so that I don’t vanish if I get lost in the middle of the world’s highest peaks,” he said.

Kim’s next trip, which he plans to go on next year, will be to Angel Falls in Venezuela.

“A lot of people my age pretend they’re old,” he says. “There’s no need to do that when you can still do so many things.”