In the words of an old proverb, don’t boast your talent in calligraphy, painting, dancing and singing when you visit Jindo. The collection of some 230 small islets is full of rich cultural heritage.

“Jindo used to be a land of exile for scholars during the Joseon Era. The scholars suppressed their tears and regret with art. That’s how folk culture has developed in the area,” said Lee Pyong-gi, head of tourist culture guides for Jindo County Office.

“Along with the beautiful scenery, each tourist destination in Jindo has its own story to tell, tales that have been accumulated over long periods of time,” he said.

Jindo County boasts the highest number of designated cultural assets in all the country’s municipal and provincial governments.

The majority of intangible assets are the music and sounds that have been handed down throughout Jindo’s history, such as a song sung by people doing farm work and chants accompanying exorcism rituals.

Sitgim-gut, which was designated Important Intangible Cultural Property, is a shamanistic ritual performed to escort the spirit of the dead to heaven by “washing” it or making it “pure.”

Jindo is also a birthplace for the UNESCO-listed folk song “Arirang,” which reflects Koreans’ unique sentiment of “han,” representing the suppressed yet hopeful desire for justice.

The legacy of Jindo’s artistic value can be found at Ullimsanbang, where painter Sochi and his descendants have made artwork for over a century since 1856.

The atelier, nestled deep in the forests of Mt. Chomchalsan, is known among art historians as the mecca of Korean painting.

Unrim, which means “forest of mist” in Korean, originates from the misty landscape where Ullimsanbang is located. This forest mist has been the subject of Sochi’s family’s ink-and-wash landscape paintings.


Flashing back to naval victory

Jindo ― specifically, the Uldolmok Strait ― is the site of the historic 16th naval battle of Myeongnyang depicted in the recent blockbuster “Roaring Currents.” Jindo hopes the film will help create enough momentum to attract tourists to the area to relive Adm. Yi Sun-sin’s victory against the Japanese fleets.

This is because tourism is one of the chief sources of income for the island.

The Uldolmok Strait, which is also known as Myeongnyang Strait, is spanned by Jindo Bridge, connecting Jindo County with Haenam County.

The 484-meter-long bridge itself is a worthwhile tourist attraction, and the site’s popularity has soared since the film’s release on July 30.

The Uldolmok Strait measures 294 meters wide, about the width of Seoul’s Hangang River. Water in the strait flows at 11 knots per hour, the fastest seawater current in all of Asia. People in Jindo say the water makes a loud roaring sound as if young men were shouting in their loudest voices. There are also whirlpools in the passage, making it difficult for ships to travel against the flow. 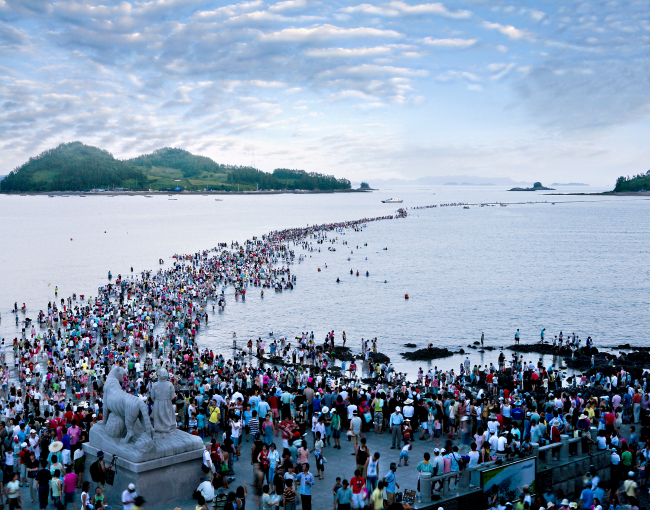 To foreign tourists, Jindo is better known for its Jindo Miracle Sea Road Festival, an annual event celebrating a natural phenomenon in which the Jindo Sea opens up to reveal a 2.9-kilometer pathway connecting Jindo Island to the nearby island of Modo.

The phenomenon first received international attention in 1975 when Pierre Landy, the former French ambassador to Korea, told a French newspaper it was the Korean version of Moses’ miracle, referring to the biblical parting of the Red Sea.

Every year, around 1 million foreign and local tourists visit the site to witness the hour-long phenomenon in the second month of the lunar calendar, according to the county office. The festival was held from March 30―April 2 this year.