[ The Korea Herald – Send E-mail ]
[Weekender] Island looks for hope after ferry disaster
By Korea Herald
Published : Aug 22, 2014 - 20:57
Updated : Aug 22, 2014 - 20:57
JINDO, South Jeolla Province ― As a successful businessman who owns a wedding hall and a photo studio, Cho Jae-yong, 37, is a motivated and a respected Jindo resident, who has built a thriving business based on his diligence and a strong human network.

But he misses the good old days.

“I ask myself every day, ‘What if I could go back to the night before April 16?’” Cho told The Korea Herald. April 16 is the fateful day the ferry Sewol capsized off the coast of Jindo Island on its way from Incheon to Jejudo Island.

Business has been on a steady decline since then, with Jindo farmers and fishermen losing millions of won. But it is not only the low profit margin that keeps Cho up at night. He wants to know what things would have been like if the passengers on the ferry had been saved. 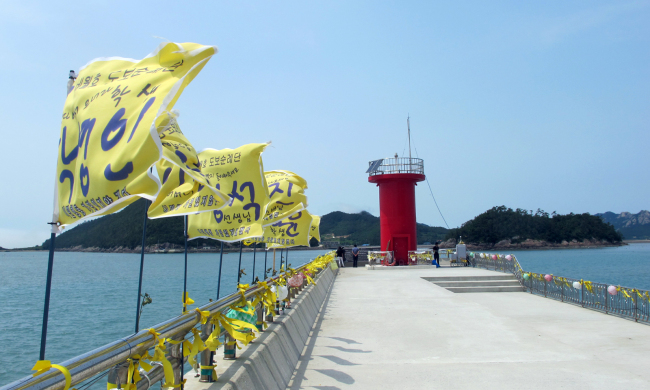 Yellow flags with prayers for the return of 10 missing students from the Sewol ferry disaster wave in the wind along the pier at Paengmok harbor on Jindo Island where search-and-rescue operations are still running. (Yonhap)
According to Jindo County Office, the ferry accident has incurred some 90 billion won ($88 million) in damages for Jindo, in part due to groundless online rumors claiming that local products have been contaminated by the debris of the capsized ferry.

Tourism has also gone down the drain, as people have become hesitant ― some due to guilt and fear ― to visit an area that witnessed so many deaths at once.

“Our hearts were broken by the untimely deaths of those onboard the Sewol, while our spirit has been crushed by a dying economy,” Cho said.

The number of visitors to Jindo’s major tourist sites stood at 23,255 between April and May this year, down about 80 percent from the 111,627 recorded during the same period in 2013, according to the island’s special task force handling the ferry accident.

“We expect the damage to get even worse once the government decides to salvage the sunken vessel, after which more debris and oil will spill into the ocean,” said Oh Gwi-seok, spokesman for the Jindo County Office.

Jindo, however, refuses to go down without a fight, and the whole nation is rolling up its sleeves to help.

“Roaring Currents,” a summer blockbuster depicting the historic 1597 battle between Korean naval hero Adm. Yi Sun-sin and the Japanese in the Ulldolmok Strait near the island, is one way the film industry has helped support the people of Jindo.

The movie became an instant box office hit when it was released on July 30, and many believe it is helping to draw tourists back to the battle site.

But of course, it will take more than a film to rejuvenate the Jindo economy.

The Jindo County Office spokesman said that the island is also preparing events and festivities to celebrate the admiral’s achievements and rebuild Jindo’s reputation as the land of hope.