[ The Korea Herald – Send E-mail ]
Tunnel to Jejudo unlikely soon
Ministry said to be reviewing the W16tr undersea rail project
By Korea Herald
Published : Aug 20, 2014 - 21:19
Updated : Aug 20, 2014 - 21:19
The South Korean government is mulling over a 16 trillion won ($15.7 billion) project to build an underwater tunnel linking South Jeolla Province to Jejudo Island, the Transport Ministry confirmed on Wednesday, but added it is unlikely the project will be realized in the near future.

The Ministry of Land, Infrastructure and Transport is reviewing the plan for a rail link that would connect the mainland and Jejudo Island through an undersea tunnel for high-speed train services after the South Jeolla Provincial Government requested the ministry’s support for the project.

“The ministry received a request from the South Jeolla government to build the Mokpo-Jeju KTX but it is one of some 70 requests from other municipal and provincial governments,” a ministry official said.

The official added that the final decision would be made next year when the government unveils a master plan to revamp the country’s railway infrastructure.

A local newspaper reported Wednesday that POSCO Engineering and Construction reported to the Transport Ministry on the feasibility of the undersea project. 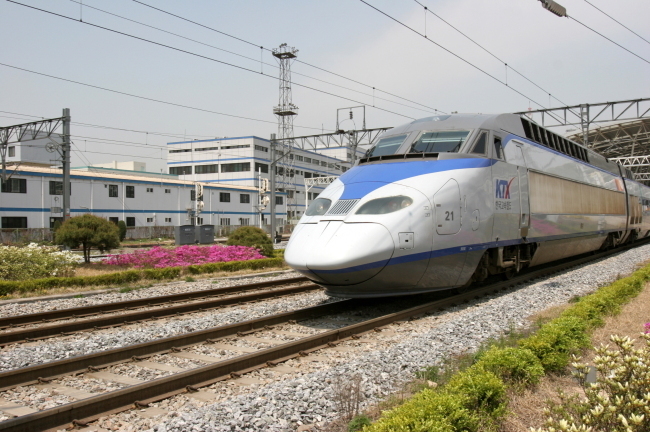 A KTX high-speed train at Seoul Station. (Bloomberg)
Both POSCO E&C and the ministry have denied the claim.

“It’s true that we’re interested in the project, just like many other construction companies, but we did not submit a report to the Transport Ministry,” Jun Dong-joon, a POSCO E&C spokesperson told The Korea Herald.

He added that it was impossible for the company to single-handedly carry out the undersea tunnel project due to its massive scale. The total building costs alone are estimated at 16 trillion won.

The Korea Transport Institute has predicted that it would take more than 10 years to complete.

This is not the first time the Jeju underwater tunnel project has come into the limelight, as politicians and local governments have been discussing the tunnel for several years.

In 2010, the government was forced to shelve the plans due to cost concerns. The project was a prominent campaign pledge for a presidential candidate in the 2012 race, but was met with a barrage of criticism from Jejudo Island.

The island’s government claimed that the construction of a new airport was a more urgent and realistic plan than building the undersea tunnel.

The Jeju Development Institute also opposed the plans on the grounds that it could damage the identity of the island as a Special Tourist Zone.

It added that tourists would spend less time on Jejudo Island as instead of staying overnight, they could simply choose to head back to the mainland via the high-speed train.