[ The Korea Herald – Send E-mail ]
[SUPER RICH] Chairman of Orion to share governing power
By Seo Jee-yeon
Published : Aug 11, 2014 - 21:21
Updated : Aug 11, 2014 - 21:21
Family-controlled Orion Group, the nation’s second-biggest snack giant after Lotte, took a bold measure last week by dismantling the office of chairman, which had served as the control tower for the group for decades.

Prior to this, group chairman Tam Chul-kon had governed the group with his wife and vice chairman Lee Hwa-kyung since he took up the chairmanship in 2003. Tam is a son-in-law of the late Orion founder Lee Yang-gu. 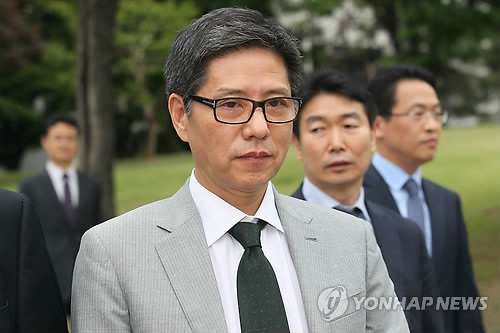 Tam Chul-kon
“There is no doubt that dismantling the control tower would strengthen the responsibility of the managers running the Orion affiliates, while also streamlining the business to eliminate overlap between the control tower and the affiliates,” the group said in a press release.

What this all means is that Tam and his family will now have to share their authority with professional corporate managers who do not have familial ties with the group. Currently, Tam and his wife hold about a 30 percent stake in Orion.

“The winds of change were first felt when Huh In-cheol, former vice chairman of Shinsegae Group and CEO of E-mart, joined Orion as the group’s vice chief last month,’’ an industry source said.

Orion believes the change will be positive, as with new managers on board, the group would have to strive to meet the new governing standards that would be proposed.

“We believe more focus would be placed on overseas market expansion, which is key for the group’s future growth,’’ a group official said.

The future of Orion Corp. ― the de facto holding company of the group ― literally depends on its overseas performance, as can be seen in how it was impacted by the success of the firm’s best-selling product Orion Choco Pie in China.

Thanks to the fast-growing demand for the marshmallow-filled pies in China, overseas sales of the snack maker overtook domestic sales as of 2012.

However, the company failed to achieve double-digit sales growth in China last year, largely due to a slowdown in the Chinese economy. The share prices of Orion stocks, once at 1 million won per share, fell to 900,000 won as of Aug. 8.

“We are currently making efforts to further expand in the Chinese market by generating more demand for Orion brands in second- and third-tier Chinese cities,’’ a company official said.

Besides this sense of urgency for maintaining a lead in China, Tam has other reasons for wanting to prove his governing capabilities.

In 2011, the 59-year-old chairman was publicly criticized after he was indicted by prosecutors on charges of embezzling nearly 30 billion won from Orion and also for breach of duty. He was released in 2013 after the Seoul High Court delivered a three-year prison term with a five-year suspension.

In an effort to take responsibility for his wrongdoings, the Orion chairman resigned from his post as head of Orion Corp. and the firm’s corporate board.

Despite his efforts, public anger against members of the owner family exploded again early this year when the financial watchdog revealed that the couple received a thick paycheck each last year. Despite his vacancy due to the protracted legal battle, chairman Tam received an annual salary of 5.39 billion won ($5.2 million) in 2013. That was the highest in the snack industry. Vice chairman Lee earned 4.38 billion won.