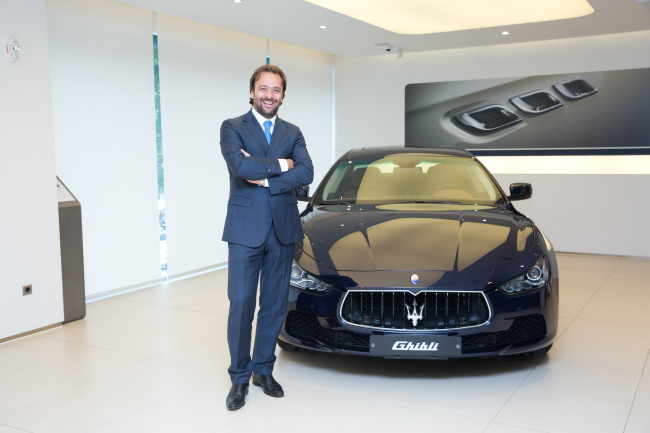 Umberto Maria Cini, Maserati’s managing director of overseas markets, poses at the carmaker’s dealership in Cheongdam-dong, southern Seoul, Thursday. ( Forza Motor Korea)
“It’s definitely a success that we have prepared over the years and of which now we see the results. It was meant to be like that.”

According to the carmaker, Maserati sold 120 vehicles in 2013 in Korea, a 131 percent growth from the previous year. In the first half of this year, its sales exceeded 280 units.

With sales of the diesel versions of the Ghibli and Quattroporte speeding up in the latter half, Korea is expected to see some 700 unit sales this year, becoming one of the top 10 markets for Maserati.

Maserati, armed with more affordable prices than before and the “Made in Italy” appeal, has seen stunning growth globally in recent years. Currently, nearly half of the cars are sold in the U.S. market, while China, in the No. 2 spot, is catching up quickly.

The brand’s orders are on pace to increase to about 40,000 cars this year, more than double the sales in 2013. Buoyed by the high-speed growth, its parent Fiat Chrysler aims to lift the sales to 75,000 vehicles in 2018.

Korea is one of the key markets, Cini stressed, for achieving this global growth strategy.

Amid the soaring growth of foreign car brands here, sales of their high-end models worth 100 million won ($97,000) or more have increased more than 30 percent this year, outpacing the industry average of some 20 percent. In Korea, the entry-level Ghibli is priced at about 181 million won.

“Korea is definitely an important market that you can’t live without. I’m curious and surprised to understand that still some brands are not present here,” said the executive, who was visiting Seoul last week to meet business partners here.

“At Maserati, there is no biggest or smallest market. Every single sale counts.”

Maserati is currently offering four models: the Ghibli and Quattroporte with four doors, and coupe and convertible versions of the two-door Granturismo.

“Our engineers have developed a very specific engine sound system for diesel models. It does sound like Maserati,” he said.

In the coming years, Maserati also plans to introduce new models, including its first-ever sport utility vehicle the Levante and the Alfieri sports car.

The Maserati executive, who talked about huge growth throughout the interview, made it clear that the carmaker will not seek to become a mass-class competitor.

“The balance is on the limited number of production. We will remain an exotic and exclusive brand,” he said.

Cini added that the company will pour resources into marketing activities in Asia as well as extending its dealership and after-sales service network.

In Korea, Maserati plans to open a new service center in Bundang, Gyeonggi Province, in July and another in Busan in October.

Maserati, which operates two subsidiaries in China and Japan, has no plan to form a new one in Korea, he said, noting the strong partnership with the official Korean importer Forza Motor Korea.