That is Aladdin Used Books ― a used-book franchise of online seller Aladdin.

The company, which runs 19 shops, has chalked up an average 30 percent annual growth in sales, said company spokesperson Jo Sun-ah.

Aladdin Used Books is not the typical small, “crammed to the ceiling” kind of shop.

Rather, it is the secondhand equivalent of the U.S. Barnes & Noble chain, with a pristine interior, large and varied selections of books, CDs and DVDs ― easily searchable on in-store computers ― and cozy reading spots here and there. 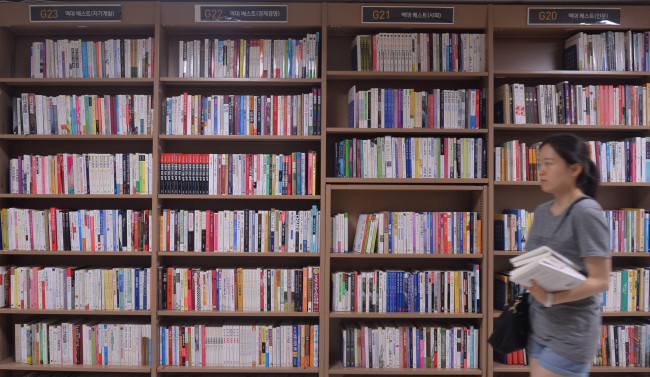 A customer passes by bookshelves at the Jongno shop of Aladdin Used Books chain, which opened in 2011 in a basement of a building that had housed a nightclub. (Lee Sang-sub/The Korea Herald)
One early afternoon at its shop in Jongno this week, customers were browsing and reading or unloading books to sell to the shop.

Among them was Lee Youn-kyung, who was searching for books that she would like to read or lend to patients at the hospital where she volunteers. She chose a total of 33 books and paid 136,700 won for them.

“It is my first-time shopping here. I found out about this place on the Internet, because I needed to buy a lot of books,” Lee said as she stepped out of the shop. “I will definitely return when I need more books.”

Jang Seo-hui, a sophomore in university, calls herself a regular there.

“I come here once almost every two weeks. I am a seller rather than a buyer, though,” she said. She had just turned in three ― two comic books and a philosophy book ― to earn 5,000 won: 1,000 won each for the comics and 3,000 won for the more serious title. 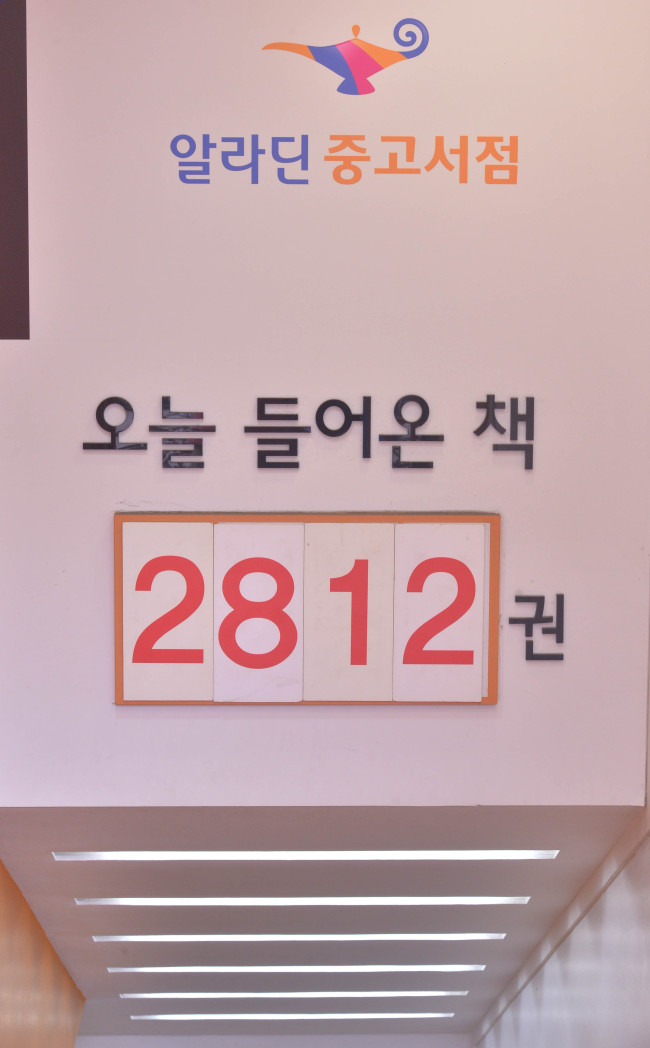 A signboard announces the number of the day’s new arrivals. (Lee Sang-sub/The Korea Herald)
This Jongno store opened in 2011 in the basement of a building where a nightclub used to be. Thanks to a convenient shopping experience and vast inventory of books across genres, on top of rare and out-of-print titles, the Aladdin used book chain grew from 1 store in 2011 to 19 now. It also runs a store in Los Angeles.

The secret of its success, Jo explained, is the ability to evaluate used books based on the extensive network and database it has established as a retailer of new titles.

“Thanks to this database, we’re able to check a book’s past popularity and determine its marketability, then reflect that in pricing for both sales and purchases,” the official said.

“We’ve been in this business for only three years now. We’re still learning how to operate and manage used bookstores by doing it,” she added.

One thing that Aladdin learned is that it helps to highlight new arrivals, as customers love to check out what other people have just sold to the store.

“The new arrivals section, which features books that were unloaded by someone that day, is the most popular of all corners,” Jo said. “I guess it’s more popular than the new bookstores’ new release section.”

The Aladdin franchise, though loved by bargain-hunting readers, is criticized by industry insiders who regard it as a veiled tactic to move new-title inventories with steep discounts.

With every Aladdin store opened, the already-struggling, small used and new bookstores in the neighborhood suffered a deadly blow, they claim.

Aladdin’s response to the criticism is that it is simply in the used-book business, which has been around for decades ― nothing more and nothing less. There is no hidden intentions, it says.

“As a book retailer, we want to engage with readers in all possible ways. That was why we started this business back in 2011. Right now, it accounts for only a small part of our revenues, but we’re keeping it, because it helps the Aladdin brand among readers,” Jo said.