[ The Korea Herald – Send E-mail ]
[Weekender] Independent bookshops cater to English readers
By Korea Herald
Published : Jul 11, 2014 - 21:19
Updated : Jul 13, 2014 - 09:25
Whether looking for the timeless literary classics from Brontë or Fitzgerald, or prefering to check out Danielle Steel’s newest tale of high society crisis or the next mentally disturbing nightmare sequence of Stephen King, Seoul has a couple of well-established bookstores to accommodate all of your English book needs.

While it may be no longer that difficult to track down physical copies of the latest English-language publications in the “Foreign Section” at any Seoul’s big chain book establishments such as Kyobo or Youngpoong (YP) Bookstore, there are a handful of independent shops with a more personal relationship to their books. 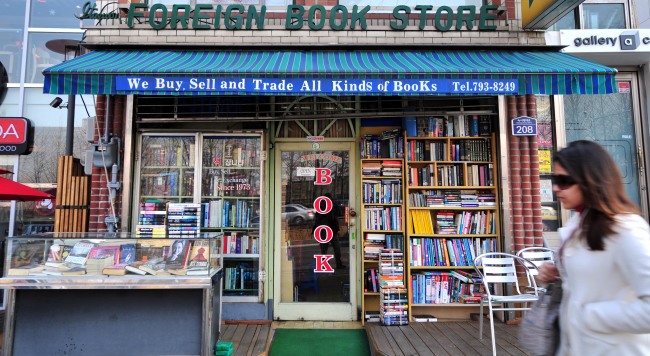 The Foriegn Book Store located in Itaewon-dong, Seoul. (Korea Herald file photo)
Although upon first glance the “Underground Foreign Bookshop” may appear like a giant garage sale dedicated solely to books, it isn’t without its own charm with each and every book having a story behind it.

Tucked away from the non-Korean heavily populated areas such as Itawon-dong and Hannam-dong, the Underground Foreign Bookshop is a bit off most of the international communities’ radar, located in the underground shopping area beneath City Hall in Jung-gu.

“When you compare my shop to a lot of the other big chain bookstores, while yes they may have a lot of new and clean books in bulk, but they do not have a lot of variety in their selection,” said H.R. Lee, owner of the Underground Foreign Bookshop. “Most of these big stores carry recent publications and popular, award-winning titles. What is missing are all the books that fall in between.”

This tight-spaced and cramped little bookshop is overflowing with books, stacked up from floor to ceiling at nearly twice Lee’s height. The owner is currently in the process of reorganizing his books as the piles are now taking over every inch of space he has. Just two steps into the shop, customers are halted by a book wall. When first walking in the door, you immediately notice that the books are not in alphabetical order, not in any order really, however, Lee claims to have his own system and can find any book with ease.

In his near two-decade span of collecting books, Lee has amassed a collection of what he estimates to be more than 100,000 books from fiction, non-fiction, comics, coffee table books and even old magazines.

So many books that in fact, it even got to the point where Lee chose to remove his desk and computer so that he could accommodate more of his collection.

“Oh, this is nothing,” he said as he pointed at the learning towers of books behind him. “I have about two times more of what’s in here is in storage right now.”

The Underground Foreign Bookshop has been providing customers with English publications (as well as some texts in other languages such as Chinese, Japanese, and French) since the 1980s.

Lee claims to have been a loyal customer of the shop for more than 15 years, and when he had the opportunity to take over the store in 2003, he jumped at the opportunity.

“You know people may not think of my store as much and it’s really difficult for me to explain why people should shop here rather than those big stores,” Lee said. “To a big chain store, 100,000 books is nothing, but a bookstore is more than just having new books in bulk.”

However, what Lee may not be able to offer in terms of brand new books and bulk services, one of the obvious benefits the Underground Foreign Bookshop brings to the table is the low prices. The average price range for paperback books is from 2,000 to 5,000 won. Customers who are not looking to buy can still stop by the shop to sell or exchange their books.

Lee, who is a true book-worm at heart, says he still dedicates every Saturday to finding new books in the hope of stumbling across any new titles to add to his mass collection.

“I think there are still a lot of people out there who appreciate old and used books,” he said as he picked up a used copy of Ernest Hemmingway’s “Green hills of Africa” and smelled the pages. “You can’t beat the smell of old books.”

Aside from the Underground Foreign Bookshop, those looking for new and used English publications can also visit “What the Book?” and “The Foreign Book Store,” both located in Itaewon-dong in Yongsan.

However, for those who have tailored their choices to English-translated texts related to Korean literature, culture and history, the Seoul Selection bookstore located next to the Gyeongbokgung Palace may provide the most wide-ranging options.

“Unlike other English bookstores (in Korea), the Seoul Selection bookshop specializes in books and dvds regarding Korea,” said Kim Yu-jin of Seoul Selection. “We also have a Website in English so even those who are not comfortable with Korean can easily find and purchase books from our online store.”

For more information on Seoul Selection and its collection of English publications, visit www.seoulselection.com.