[ The Korea Herald – Send E-mail ]
[Herald Interview] Hibrand to woo high-end shoppers
By Seo Jee-yeon
Published : Jul 10, 2014 - 20:55
Updated : Jul 10, 2014 - 20:55
Hibrand, a premium shopping outlet, located in the affluent Yangjae area of Seoul, is eager to change the tide in local shopping trends by attracting more people to outlet stores, a move that its CEO sees to be critical as the shopping center seeks the next level in business.

“With the Korean economy entering a low-growth era, more high-end shoppers are migrating to premium outlets from department stores,’’ Hibrand vice president Jin Chang-bum said in an interview with The Korea Herald.

“Riding on these changing retail trends, we are looking to upgrade our brand portfolio and to launch a variety of marketing activities as part of efforts to woo even more high-end outlet shoppers.”

One such activity is the Hi Design Festival, which will be held at Hibrand from July 18-20. The event was planned by Herald Corp. and will be jointly hosted with Hibrand to target new shoppers who place more priority on design and style, rather than labels.

“The event will offer visitors a chance to enjoy the design and products of young artists, and also participate in a number of charitable programs,’’ Jin said. 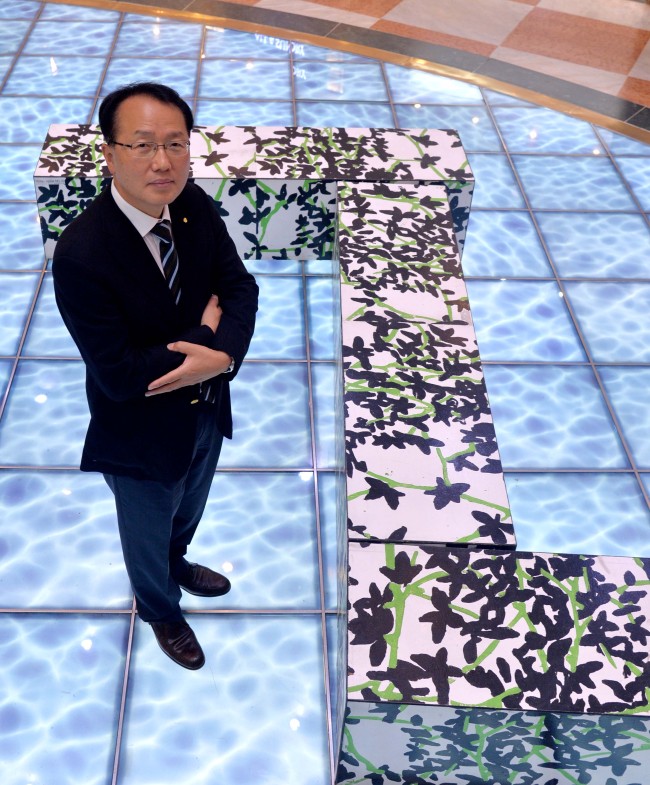 Jin Chang-bum. (Lee Sang-sub/The Korea Herald)
Believing that a new brand portfolio will be key for the future growth of Hibrand, Jin, who joined the company with a mission of innovation in May, is driving the introduction of a new brand zone at the mall.

One of the projects he is leading is to build an outdoor shopping area, which is ready to open on the first floor of the fashion mall.

These efforts at innovation are expected to bring more credibility and excitement to the shopping venue, according to Jin.

Hibrand was founded by Inpyung, a construction company, in 2005. It was built on a vast 30,000 square-meter plot of land, but needed to attract more brands ― both new and high-quality ― to open up the wallets of high-end shoppers.

To pursue these goals, Jin, who has 25 year of experience in the retail sector, has strengthened the merchandizing business department.

“The company also started to communicate more with the brand shop owners on new retail trends and the future direction of Hibrand,’’ he said.

Hibrand’s strength and weakness lies in the fact that unlike department stores, its stores have individual owners, meaning that in order to realize change, Hibrand must first convince them.

Change was also expected within the Hibrand management, as Jin is hoping to achieve his mission of pushing employees into thinking outside the box.

“Up until now, the company has been resistant to change, enjoying a stable business model-rental income from hundreds of brand shops,’’ Jin said. “This is why I am working to change the mindset of the employees, telling them that we can achieve higher growth in this advent of outlet-goers, which in return will translate into more benefits for everyone.”

The CEO said he was also driving to expand the partnerships Hibrand has with other retail channels.

“For Yangjae, one of the popular residential areas for middle-income earners in Seoul, the infrastructure is mostly in place for it to become a top shopping area, but there is a lack of appeal to visitors mainly due to the lack of killer content,” Jin said. Public transportation may also be a factor, he added, although traffic conditions have improved since the launch of the Shinbundang subway line.

To help turn the area into a shopper-friendly district, Hibrand plans to form a partnership with other commercial facilities in its vicinity, such as the supermarket-chain Emart, Costco, K-Seoul Hotel and aT Center, to offer a more diversified and satisfactory shopping experience.

“As our next step, we plan to propose to the city government a blueprint for building a cultural mecca in the area and ask for support,” Jin said, adding that Hibrand would benefit from the transformation of Yangjae into a bustling shopping district.