But the drugs that have come out of years of DNA research are still unable to prevent recalcitrant cancer cells from terminally spreading.

A Korean biologist said ribonucleic acid, or RNA, one of three classes of biological macromolecules essential for life, will likely play an important role in treating cancer in the near future.

“Almost 98 percent of RNA remains unknown. But as we conduct more research on it, we will be able to find more useful solutions to cancers,” said Jeong Sun-joo, a molecular biology professor at Dankook University. 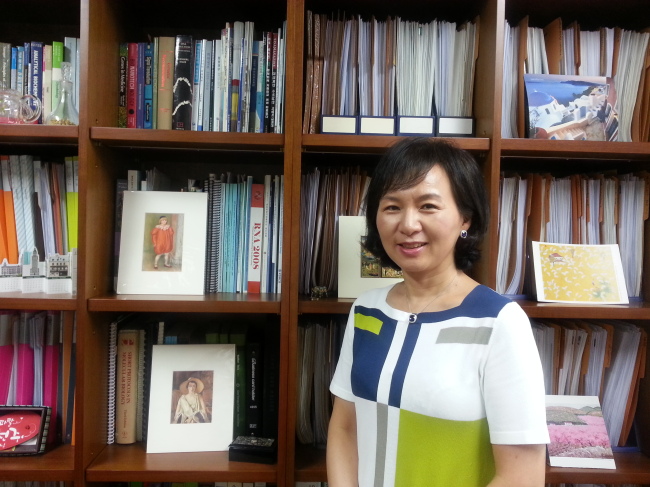 Jeong Sun-joo, a molecular biology professor at Dankook University
Jeong, who described cancer as a lifelong companion rather than an enemy, found that some cancer was linked to interactions between RNA and mutated forms of beta-catenin, a protein which regulates the coordination of cell-to-cell adhesion and gene transcription.

Her research found that mutant beta-catenin caused mutations in RNA molecules, and that some cancer-related activity was more strongly affected by these RNA mutations that than the DNA mutations themselves.

Those other DNA mutations were initially thought to play a critical role in causing cancer.

Jeong won the 2014 Korea L’Oreal-UNESCO Awards for Women in Life Science research for her work.

Her recent studies have been focused on developing aptamers, molecules that attach themselves to a specific target molecule. She has been seeking to develop molecules that bind to mutated beta-catenin to prevent cancer-causing interactions between the protein and the RNA.

The professor said she hopes her research would pave the way for the scientific community to find more anticancer therapeutic targets.

In Korea, “long-term and fair support” is required from both the public and private sectors in order to see a significant development in basic science research.

“Even though the government says biotechnology is its next growth engine, it just wants to see short-term results without much preparation,” she said.

She also said that most of the country’s funds are being funneled into only one or two research institutes, and almost all smaller labs that carry out basic biotechnology research, including those affiliated with universities, are struggling due to a lack of financial support.

She emphasized the importance of supporting female scientists who often have to juggle child care, housework and research.

“Many talented female graduates and postdoctoral fellows give up and suspend their research after having babies,” said the professor.