[ The Korea Herald – Send E-mail ]
[Weekender] Seoul’s eclectic, flourishing nightlife
Nighttime culture becomes more diverse, international and sober
By Korea Herald
Published : Jul 4, 2014 - 21:45
Updated : Jul 4, 2014 - 21:59
The history of Korea’s nightlife is short. From 1945 to 1982, the authoritarian governments ordered Koreans to stay indoors between midnight and 4 a.m. Under martial law, the city lights were switched off and people were forbidden to go outdoors, except for those on official duties.

Nowadays, those hours are primetime for Korean nightlife.

People watch the rainbow fountain show at Banpo Bridge in Seoul. (Kim Myung-sub/The Korea Herald)
The country has seen its night culture thrive since Chun Doo-hwan lifted the curfew to appease growing public criticism of his military rule. Initially an instrument to express one’s freedom, Korean nightlife has since become more about having a good time.

Of course, like most other places around the world, Korea’s nightlife is still mostly about drinking, singing and dancing. But in recent years, Korea has seen a change in its night culture. 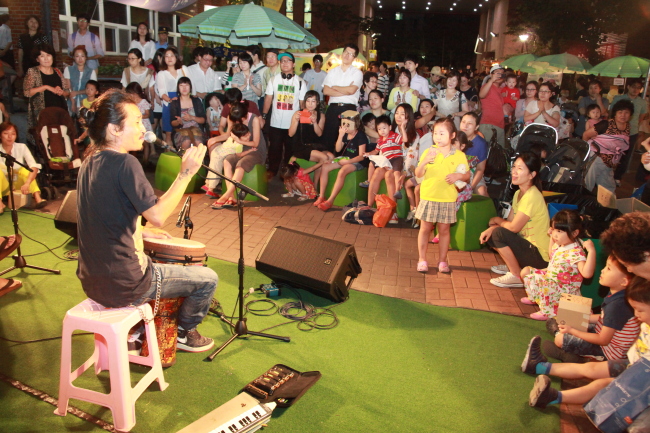 An indie band performs at Yeongdeungpo Dalsijang, a unique, community-centric night market held monthly in southwest Seoul. (Dalsijang)
Rather than staying all night long drinking poktanju ― a mix of beer and soju ― a growing number of people are looking for ways to spend their time after sundown in a more refreshing, entertaining and healthy way.

“I don’t want to spend the night drinking with my company colleagues or boss,” said Jeong Hye-won, 33, who enjoys cycling along the river in Seoul. “I love the way I enjoy the refreshing breeze when cycling with my friends and having a ‘chimaek party’ afterward in a Han River park.”

Thanks to the rising demand for a diverse night culture, the country has seen a rapid growth of 24-hour businesses. From shopping malls, saunas, gyms, movie theaters, restaurants and even beauty salons, anyone can enjoy Seoul’s glittering lights without the need for alcohol. Local markets in Seoul also greet customers looking for delicious night meals and cheap fashion products.

The municipal office released a guidebook for foreign visitors in March to offer useful information on the city’s nightlife. Titled “The City That Never Sleeps: Seoul,” the book introduces a variety of nightlife events, places to visit or eat and where to ask for help in emergencies.

“The guidebook was published to help not only foreign visitors but also citizens see, feel and enjoy the charm of Seoul,” Kang Tae-woong, director of tourism policies at Seoul’s municipal government.

“I hope that visitors to Seoul can fully experience this multi-faceted city.” The booklet is offered for free at www.visitseoul.net.