But drinking a copious amount of booze is not what all night activities are about here.

From a pub equipped with a digital dating system to chimaek fiesta, new forms of night culture have become fresh recreation for Koreans and once-in-a-lifetime experiences for foreign visitors.

At a glance, Pocha Factory is just among tens and hundreds of bars and pubs placed on the 760-meter street stretching north from Gangnam Station in Seoul. 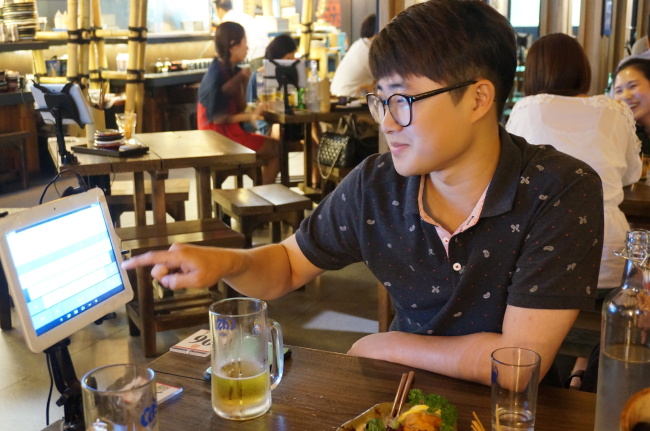 A customer uses a text messaging service at Pocha Factory to join a group of girls at the next table for a drink Monday. (Suk Gee-hyun/ The Korea Herald)
But really, people come here in single sex groups to find partners using an application on the tablet computers set at each table.

Customers, usually men, send messages or dishes to the table they want to join. Senders have to pay 1,000 won ($0.99) per short message to appeal to the other sex, while the receivers are granted a 1,000 won discount.

The more popular you are, the less money you will pay on your way out.

Kim explained that about 8 out of 10 couples who sit together leave for another round on weekends, while the chances are lower on working days.

Even on Monday, the 800-seat store was bustling with customers, with men busily browsing the tables.

“Me and my guy friends got tired of talking about the same story every time we go out for a drink. It’s a fun way to hang out with girls who also come in as a group, so everyone goes home happy,” Yoo Joon-ho, 25, a college student, said.

On a sleepless summer night, some head down to the popular banks of the Hangang River for a good old-fashioned picnic with chicken and beer.

One of the country’s fortes is delivery stores’ determination to deliver to any spot, even on a mountain, making sure the food arrives at the right temperature.

Easily accessible from different parts of Seoul, the lush grass area of the Hangang River in Banpo and Yeouido is a popular place for a late-night “chimaek” fiesta. Chimaek is a compound word of chicken and “maekju,” the Korean word for beer.

“We get swamped with phone orders between 6 p.m. and 8 p.m. Some franchise stores near Banpo mainly handle the orders because small ones can’t handle the volume,” a delivery man from a BBQ store in Banpo said. BBQ is a leading chicken franchise that occupies more than 10 percent of the domestic market share.

Night sales went up 40 percent last summer, BBQ officials said, with some stores having to extend their opening hours to 2 a.m. due to the flood of chicken deliveries to parks.

And just about when you think it is time to call it a day, the Dongdaemun shopping area gets even busier with retailers from across the country gathering for wholesale shopping and where visitors can see trendy Korean fashion styles fresh from the factories.

But after a die-hard night out, Koreans sometimes crash in a jjimjilbang, or a public sauna, which are open 24/7. This incredibly large-space sauna is not the end of the night, though, but merely another round.

From steam rooms to communal, unisex areas to sleeping quarters, the jjimjilbang is a go-to place for those who want to cure a hangover while relaxing with some great food.

“I sometimes stay from late in the afternoon till midnight when hanging out with friends on a hot summer day. They have a table tennis room, ice room, Internet cafe, karaoke, TV room and gym. Pretty much everything you would do with your friends or a boyfriend,” said Choi Jung-in, 24, a graduate student in Seoul.

Among some popular jjimjilbangs known for their large space and facilities are Dragon Hill Spa and Siloam Sauna in Seoul and Spa Land Centum City in Busan.