[ The Korea Herald – Send E-mail ]
[Herald Interview] Cathay Pacific confident of value-for-money service
Airliner boasts well-trained, international pilots as its selling point
By Korea Herald
Published : Jul 3, 2014 - 21:23
Updated : Jul 3, 2014 - 21:23
The allegedly rigid hierarchical culture in the cockpit has often been cited as a cause of poor communication between senior and junior pilots in Korea and other Asian countries.

The story at Hong Kong-based airline Cathay Pacific Airways, however, goes a bit differently as it says its pilots ― almost 80 percent of them being foreign nationals ― are one of its best-selling points, according to Mark Ng, the head of Cathay Pacific’s Korean operation.

Due to a lack of pilots and training facilities at home, Cathay secures most of its pilots from places outside of Hong Kong such as the U.K., Australia and Canada, and these international pilots never hesitate to raise questions when in doubt. 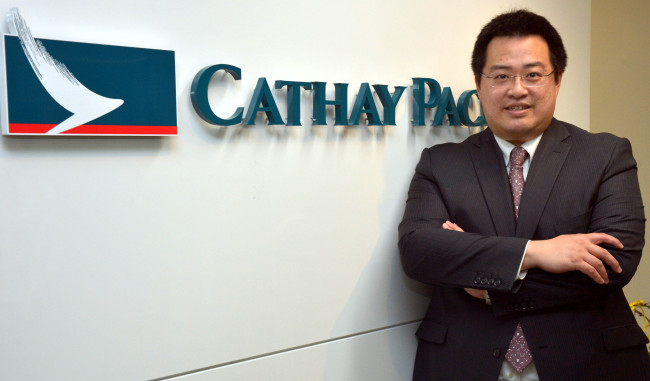 Mark Ng, Korean head of Cathay Pacific Airways, poses at the company’s Seoul office on June 26. (Kim Myung-sub/The Korea Herald)
“When it comes to safety, there should be no error. And our pilots are always willing to speak out on safety issues,” said the country chief in a recent interview with The Korea Herald. “Pilots are one of the reasons why customers choose Cathay Pacific.”

Cathay Pacific was one of the first foreign airline companies to enter Korea in 1960. Since then, it built a reputation for itself based on its wide global network and value-added services that come with its team of well-trained, international pilots.

The Korean unit currently boasts the highest frequency of flights for the Incheon-Hong Kong route among 10 airliners, operating six flights per day ― five direct and one via Taipei.

“It’s quite challenging to compete with Korean Air and Asiana Airlines on their home turf,” said Ng, who joined the Korean team in October last year. “But competition prevents us from being lazy. It’s also good for customers.”

With Korea becoming a popular destination for K-pop fans in Asia, competition in the lucrative Incheon-Hong Kong route is fiercer than ever. The two dominant Korean players are addressing the situation with an upscale push, while others are wooing customers with cheaper tickets.

The Cathay executive was confident about the firm’s strength, which lies in value-for-money services that allow for flexibility ― a key value for both business and holiday travelers.

As the airliner is based in Asia’s busiest hub for international travel, its global network also makes it easier for fliers to connect to other neighboring countries and regions such as Australia, Southeast Asia and India. Thanks to a little bit of flair, such as the premium economy seats it adopted in 2012, frequent travelers are raving. They are willing to pay a bit more for better and more comfortable in-flight services.

“Low-cost carriers are very good at marketing. They make people think their fares are low or lowest,” he said. “We don’t compete with them head-on, but we are also capable of offering very attractive fares with value-added services.”

Amid the prolonged slowdown in the global aviation industry, Cathay suffered from sluggish sales in recent months, with its outbound business hit especially hard by the Sewol sinking in April.

But the country chief predicted a modest recovery in the latter half of this year, largely driven by inbound travelers.

“I’m sure that the Korean Wave in the region will continue at least in the coming two to three years. We are closely watching their traveling trend,” he said. The number of visitors from Hong Kong exceeded the 1 million mark last year.

He added that outbound traffic could also pick up if the Korean won continues gaining against the dollar.