[ The Korea Herald – Send E-mail ]
[Herald Interview] ‘Violence against women is not a private, but public issue’
By Claire Lee
Published : Jun 26, 2014 - 21:08
Updated : Jun 26, 2014 - 21:08
The well-known “Ring the Bell” campaign was launched in India in 2008 to prevent domestic violence against women in the country. Participating in the project is rather simple: whenever you hear a neighbor being abused by her family members, you ring the doorbell and say something random, such as “What time is it?”

“The point is to make them think that ‘We have heard you,’” said Begona Lasagabaster, chief of the Leadership and Governance Section for U.N. Women. “Even though you are not engaged in facing the problem (of abuse), just ringing the bell, making sure that the person knows that you have heard what he was doing, can help in raising awareness of what is happening.”

Lasagabaster, who was in Korea this week to participate in the United Nations Public Service Forum, said domestic violence against women should be considered a public rather than a private issue, and there should be more preventative measures to stop it. Aside from the “Ring the Bell” campaign, public institutions such as hospitals and city governments can make a difference, she said. 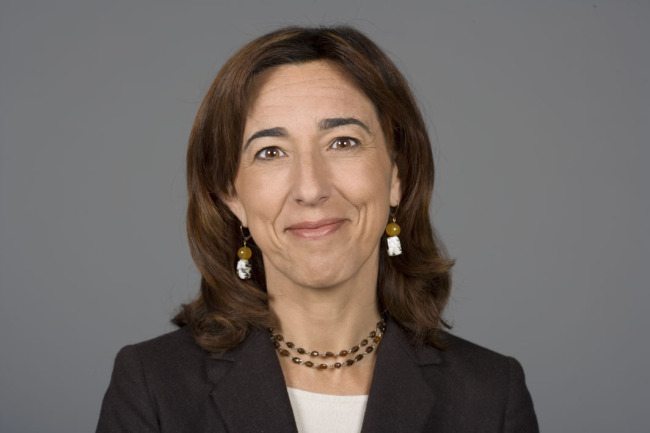 Begona Lasagabaster, chief of Leadership and Governance Section for U.N. Women
“In most of the countries, they are doing a lot mostly on the protection and reparation (in terms of public policies against domestic violence against women),” she told The Korea Herald in Goyang, Gyeonggi Province. “I think we need to shift to prevention.”

For example, city officials can provide more street lights to areas that are perceived as unsafe by local women. Doctors at hospitals can help the victims by acknowledging their problems by being attentive.

“If a woman goes to a hospital very often saying she has a headache and she doesn’t feel well, and the doctors don’t see anything is wrong with them, the chances are the woman is seeking help,” Lasagabaster said.

Violence against women is often linked with cultural and religious practices in a number of countries. For example, there is an old practice of abducting women for forced marriages in Ethiopia.

“Normally it’s not the culture or the religion,” said Lasagabaster when asked how one should approach such cases.

“It’s the way some sectors of people interpreted the religion. Sometimes it’s the male supremacy that uses the religion to dominate women. So you can work with the religious leaders and say, ‘Maybe this happened in the old days for whatever reasons but today this is not admissible.’ Religious leaders have the leadership and they can change the patterns and cultural behavior. And beyond that, I think you need to change the norms and the laws.”

Lasagabaster had a successful case to share. She recalled meeting with a female mayor of a small African village who decided to award a motorcycle to a man who behaved well towards women. In her village, having a motorcycle means being able to run one’s own business. Before the mayor introduced the awards, many young men in town beat their girlfriends or young wives.

“And it changed completely. It significantly reduced the level of violence against women in that particular municipality. Not only did they receive a motorcycle that was going to be huge for their own economic and social development, but (it was also meaningful that) they received an award because somebody was respected in the community. And it changed the behavior of young men in the village. So I think we need to be innovative in how we engage the change of culture and behavior.”