“We’re not here for one year or two years. We’re here for 20 years, 30 years, 50 years and so on. The progress has been initially slow, but we’re satisfied with what we have done. But we want to do more,” Ascoli said in an interview with The Korea Herald on June 12.

Ascoli’s remarks came during a short visit here to discuss the imminent launch of a new Davidoff line with KT&G, South Korea’s No. 1 tobacco manufacturer. Imperial Tobacco is the world’s fourth-largest tobacco firm, and it has been in partnership with KT&G since signing a brand license pact in 2010. 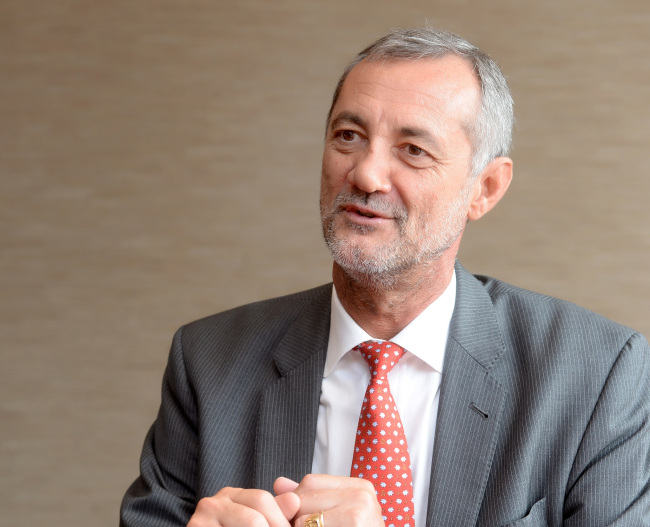 Roberto Ascoli, Imperial Tobacco Group’s division director for Asia, Russia, Turkey and Italy, poses after an interview with The Korea Herald on June 12. (Suk Gee-hyun/The Korea Herald)
Ascoli explained that the licensing agreement has been a win-win strategy for both firms.

“They (KT&G) are the ones who have an infrastructure to quickly distribute and support brands. And from their side, they also needed a partner with a premium brand ― a brand that will compete with Marlboro and Dunhill. So there was a very much mutual benefit in working together,” the director said.

KT&G is a dominant player in Korea, with 62.6 percent in market share in the first quarter. Sales of Davidoff products have also benefited from KT&G’s market dominance, Imperial officials said, although they declined to reveal the exact figures.

“I’m never satisfied (with the sales record of Davidoff) because we can always do better. But we’re meeting the targets we set by ourselves. So yes, we can do a double, a triple and even higher. But when we say we do, we do. And we will.”

Just hours before the interview, the government announced that it was reviewing plans to require tobacco manufacturers to print full-color graphic warnings on cigarette packages.

His rationale is that the tougher the regulations, the more demanding consumers become about the quality of tobacco products.

“When there are regulations, there’s likely to be further development of products that also allows us to ask for a higher price,” he said.

“Yes, regulations here are in the process of getting tougher but rest assured that there are many other places in the world where regulations are much tougher,” he said. “But smoking should always be consumers’ choice for adults.”