The U.N. Development Program is looking to deepen its partnership with Korea to help others in need by harnessing the country’s green technologies and know-how in tackling corruption, chief of its Seoul office said.

As the Seoul Policy Center is crafting its new three-year work plan, the two areas have emerged as potential catalysts for development in which the UNDP and Korea can join forces and create synergy.

The organization is working on a memorandum of understanding with the Green Technology Center launched here last year to conduct related policy research and help foster a global network for technology transfer, while seeking to provide technical support for developing countries to combat corruption, according to Anne Marie Sloth Carlsen, director of the UNDP’s Seoul Policy Center.

“(The MOU) will be about combining the green technologies and knowledge of Korea with needs of developing countries and also our knowledge of what it takes to bring green technology into play, which is very important because technology isn’t just used because you got it,” the new director said in a recent interview with The Korea Herald. 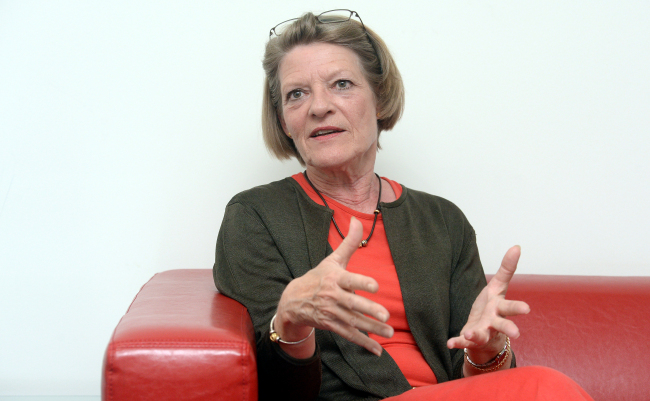 Anne Marie Sloth Carlsen, director of the U.N. Development Program’s Seoul Policy Center, speaks during a recent interview with The Korea Herald at her office in Seoul. (Ahn Hoon/The Korea Herald)
“And why anticorruption? Because it’s an area where the UNDP is strong and Korea has a lot of measures, institutions and so on.

“This is about taking Korea’s experience matching with UNDP’s knowledge and work around the world and seeing and maybe finding areas where we can add value.”

The Danish-born former diplomat took office in January, bringing her 20-plus years of experience and expertise in environmental sustainability and other various multilateral affairs.

From 2008-13, Carlsen served as a senior adviser in the UNDP’s development policy bureau in New York. Prior to joining the UNDP, she took up a slew of key governmental posts including deputy head of the Department of Environment in Copenhagen and minister-counsellor and deputy permanent representative to the U.N. in Geneva.

Her ties with the UNDP date back to the late 1980s. The day she was recruited as a junior professional officer for the New York-headquartered institution, she was offered to join the Danish diplomatic service.

“I made a choice, which I think was OK because that gave a good basis. But then some 20 years later I wanted to stay on this global environment and sustainable development issue,” Carlsen recalled.

“For this post, it comes together for me at least in quite a nice way because many issues can come up here and I worked on many of them, though of course I need to understand how it works on the Korean side.”

The policy center is an upgraded successor to the UNDP’s Seoul mission, which closed its 46 years of operation in 2009 following Korea’s stellar ascent from one of the world’s poorest countries to one of the richest.

Now an emerging donor, Seoul supports the agency’s worldwide development campaign and projects in countries like Colombia, Laos and Rwanda and Haiti, with its contribution to their joint trust fund reaching nearly $23 million since the 2009 launch.

The UNDP plans to set up a steering committee with the Ministry of Foreign Affairs here to chiefly discuss the operation of the center and their joint trust fund, which she said would be a “platform for good dialogue.” The sides also hold annual policy consultations.

“There is also increasing collaboration at the country level between UNDP country offices and KOICA offices and other Korean partners,” Carlsen said, referring to the Korea International Cooperation Agency, the state-run grant aid provider.

“We are actually due to try to map this with MOFA our collaboration worldwide to see where we can scale up and how and so on.”

Despite a steady increase in Seoul’s official development assistance, Carlsen called for greater coherence in policymaking and further collaboration among various government actors.

Reflecting social aspects are key, she emphasized, in particular to fostering a greener economy and achieving successful reforms.

“I don’t think Korea’s is alone but there has been a tendency to look at green and economy together but forget about the social dimension. But the sometime social dimension is key to achieving results because reforms are about people,” Carlsen noted.

She gave the example of fossil fuel subsidies, which add to climate change yet drain state coffers and largely benefit the better-off.

But without a “bigger reform strategy seen as meaningful to people” such as one entailing alternative solutions, positive implications and transparency about the future use of the saved money, people will only take to the streets once the subsidies are abolished, she said.

“When you work with developing countries of course you can draft plans and strategies but that’s not the most difficult part. Implementation is where the test is,” she added.

“In countries where you have a strong government you can just decide and impose. But if you want lasting results, get people onboard, and that’s where social dimension comes in.”