The ruling was the latest event in a four-year feud between the KTU and the Labor Ministry, which has been accusing it of infringing the labor law. The ministry had ordered the KTU to revise its regulation allowing fired teachers to become members ― citing article 2 of the labor law, which bans dismissed education workers from joining unions ― and notified the group in October 2013 that it is no longer recognized as a legal organization.

The KTU claimed that the government’s action violates the constitutional right to organize a group and filed a lawsuit.

“Article 2 does not violate the Constitution,” said the Seoul Administrative court in its ruling. “Education workers, unlike most workers, are required to maintain a particularly high set of ethics, autonomy, professionalism and sense of seeking the public interest. This means they should be subject to stricter regulations.”

Moments after the ruling, the KTU said via a press conference that it would appeal the court’s decision and push for a revision of the labor law on education workers. The group has accused the incumbent and former Korean leaders Park Geun-hye and Lee Myung-bak of stretching the law to repress it. The KTU has been one of the most outspoken critics of the conservative leaders’ educational policies. 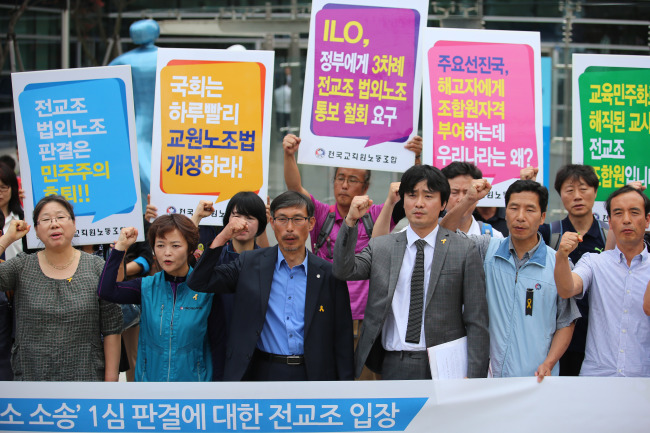 Leaders of the Korean teacher’s union protest the court’s ruling at a rally in Seoul on Thursday. (Yonhap)
The Education Ministry said it would order all of the KTU’s full-time members to return to their teaching posts by July 3, while revoking the group’s right to participate in collective bargaining with the government. The ministry will also withdraw all support for the group and ban the KTU from collecting membership fees.

The opposition lawmakers berated the ruling and said it was politically motivated.

“The court’s decision shows utter disregard for constitutional values as well as concerns from the international society,” said Rep. Han Jeong-ae, a spokesperson for the NPAD.

Education chiefs from several regions ― including Gangwon Province and Incheon ― said they will maintain partnership with the KTU despite the court decision.

“Excluding the KTU from our society is detrimental to diversity of education circles. We will keep channels of communication open to all teachers, including those from the KTU,” said Lee Cheong-yeon, the education superintendent-elect for Incheon.

Cho Hi-yeon, who will head the education office in Seoul, also expressed hopes that the ruling would not stir up confusion and feuds within education circles.

Right-leaning teachers from The Korean Federation of Teachers’ Association, however, placed the responsibility of losing the legal status on KTU and urged it to respect the court’s decision.

Outlawing the KTU, however, is expected to draw reactions from outside the country as well. According to Wednesday’s statement by the KTU, Education International, an international federation of teachers’ trade unions, expressed its wish that the Korean group retain its legal status. The International Labor Organization also criticized the government’s decision, making it clear that allowing retired and dismissed workers to become union members and leaders was internationally accepted.

Thursday’s ruling is expected to further escalate the tension between the government and the country’s progressive educators, who won most of the education chief posts in the recent local elections. Earlier this week, 13 education superintendents across the country who are seen as progressives filed complaints with the Seoul court, urging it to cancel the Labor Ministry’s decision to outlaw the union.

The Education Minister nominee Kim Myung-soo, who is known for his ultraconservative views, is expected prove a headache for the left-leaning education chiefs. Kim had been on a collision course with the progressives on most education policies, including the KTU, free school lunch programs, elite high schools and the teachers’ right to publicly express political opinions.