[ The Korea Herald – Send E-mail ]
[Herald Interview] Creating a world of imagination
Richard Taylor, CEO of Weta Workshops, talks about his inspiration for creatures and characters from blockbuster movies
By Lee Woo-young
Published : Jun 11, 2014 - 20:12
Updated : Jun 11, 2014 - 20:16
Creatures and characters from “The Lord of the Rings” and “The Hobbit” come to life at an exhibition in Seoul. Some 300 other mythical creatures also have been on display at the Dongdaemun Design Plaza since last week, fascinating fans of fantasy films and novels.

What draws attention aside from the diverse imaginary characters is the profile of the creative director behind these creations, Richard Taylor, CEO of Weta Workshops. The New Zealand-based special effects company has provided physical and digital effects for many blockbuster movies including “The Lord of the Rings,” “The Hobbit,” “Avatar,” “Iron Man 3” and “The Wolverine.”

Taylor won five Academy Awards in the areas of makeup, costume design and visual effects for his work in “The Lord of the Rings” and “King Kong.” In New Zealand, he was honored with a Knight Companion of the New Zealand Order of Merit in 2010 and named the 2012 New Zealander of the Year.

For 25 years, his job has been to breathe life into the imaginary world that initially only existed in his mind. 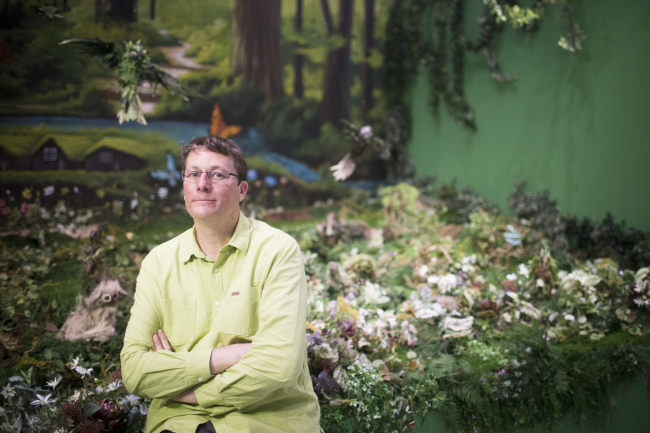 Richard Taylor, CEO of Weta Workshop, poses with a sculpture at a Seoul exhibition of the special effects and prop company’s creations. (ENA Partners)
“You have to believe in them, you have to love them, you have to go on a journey with them,” he said in an interview with The Korea Herald at the exhibition opening last week.

“We create the world that exists in the four corners of the movie screen. We want to make the audience feel like they want to peek around the edges of the screen and imagine the world existing beyond the picture,” he said.

Taylor said indigenous mythologies are big inspirations for his characters and creatures.

“We take inspiration from our own indigenous mythologies and those from other countries,” he said. He said he was fortunate to grow up in a country where indigenous culture has not been suppressed as it has been in North America, Australia and other countries. Maori culture makes up a valuable part of New Zealand culture.

“It’s the fact that we grew up in a country where you are allowed to dream of the world, think of other unique characters that may not exist in your own world.”

His imaginations go through the day-dreaming process which he calls “blue-sky dreaming,” during which he looks inside his head and contemplates whatever pops into his mind. “The team of people that work with me have inexhaustible imaginations too.” 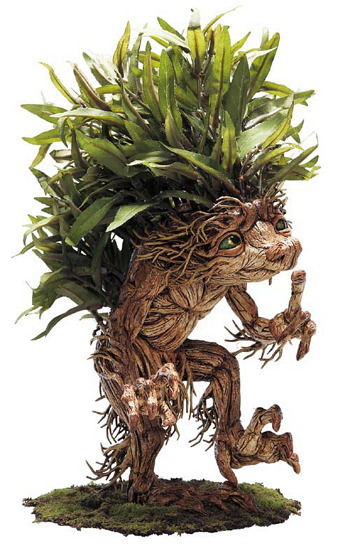 Hedgy, a character from “The Wandering Woods,” made by artist Johnny Fraser-Allen of Weta Workshop (Weta Workshop)
Fraser-Allen also created sculptural portraits of mythological characters in his “The Gloaming” trilogy, about a quest of mythical characters to return a human boy they discovered. One of the characters, the popular earth folk Wosel, has broad, thick-fingered hands and long, flat claws.

Combined with evolving digital effects, Taylor believes technology not only makes the fictional world in movies look more believable, but also invites viewers to experience a world that doesn’t exist.

“It’s a matter of time to watch cinema as a completely immersive experience,” said Taylor.

“Technologies that are developing right now will allow the audience to be part of the movie and make them feel like they are experiencing the world along with the actors. They will be even controlling the outcome of the movies. That’s where our technology will take us in the future.”