Moon Chang-keuk, 66, is the first journalist to be tapped for prime minister in the country’s modern history. The president also named Lee Byung-kee, ambassador to Japan, as the new head of the National Intelligence Service. 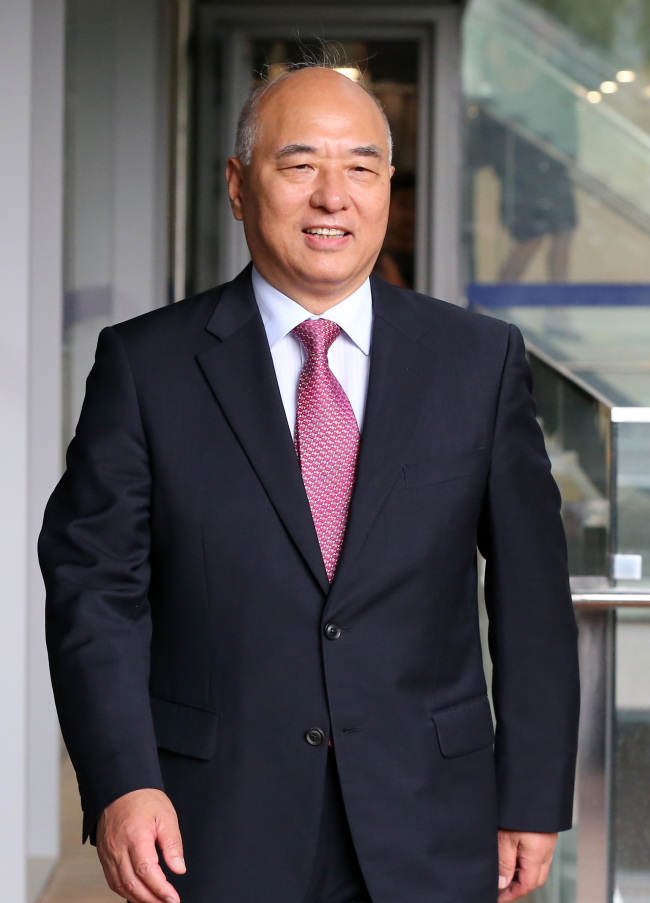 Prime Minister nominee Moon Chang-keuk. ( Yonhap)
Park’s choice of the former reporter for the new prime minister is likely to confront stumbling blocks largely because he appears to lack experience in the political arena and in public office. The new prime minister is expected to play a crucial role in Park’s efforts to spearhead drastic reforms and regain public confidence in the wake of the ferry disaster.

The prime minister and NIS chief nominees need parliamentary approval to take their posts. Skeptics cast doubt on the former reporter whether he could carry out the role of the new P.M. to be given with more power, more responsibility.

So far, the prime minister in Korea has held a largely ceremonial role as power is concentrated heavily on the president. Park vowed to give more authority to the new prime minister to push ahead with her reform drive and government reorganization plan proposed in the face of the Sewol tragedy. Park plans to launch new ministries to improve the country’s safety standards and work efficiency and root out deeply entrenched corruptive practices in the public offices.

Born in Cheongju, North Chungcheong Province, Moon built his career as a political correspondent at the Joongang Ilbo, a major national newspaper since 1975. He served as the political desk editor and was promoted to chief of the editorial staff. After his retirement, Moon, was named chief professor of media studies at Korea University and a director at the Kwanhun Club, a local organization of veteran journalists.

Moon said he feels grave responsibility over his nomination but vowed to dedicate himself to lead reform efforts aimed at enhancing the country’s safety standards.

“I will devote my remaining life to rebuild the foundation of the Republic of Korea to make the country a safer and happier place to live,” he said at a news conference held later in the afternoon.

Presidential spokesman Min Kyung-wook hailed Moon as “a man of integrity” and “firm belief” who made efforts in “eradicating wrongdoings and accumulated evil in our society” throughout his life.

“We believe that Moon is the right person to push ahead with state agendas, including the reform of public offices and the normalization of abnormal practices, through his outstanding insight and drive,” Min told reporters.

The ruling party also raised hopes for the nominee that he would play a crucial role in uniting the nation divided by regionalism and political ideologies.

But, the main opposition New Politics Alliance for Democracy, lashed out at Moon, saying he is not a person to bring reconciliation. They claim that he has expressed strong conservative political views. NPAD floor leader Rep. Park Young-sun, also cast doubts on how he could survive in the upcoming parliamentary hearing citing he has no administrative experience.

The P.M. nomination came more than 45 days after incumbent prime minister Chung Hong-won offered to step down from his post by holding himself responsible for the government’s mishandling of the ferry disaster that killed nearly 300. Last month, the president named Ahn Dae-hee, a former star prosecutor, to replace Chung. But Ahn dropped out of the nomination less than a week after he was named amid spiraling speculations that he had received favors during his law career.

Ahn’s resignation dealt a blow to Park, who has been struggling to restore the battered image of the government in the wake of the Sewol disaster.

President Park has been dithering over the nomination of the nation’s No. 2 post amid mounting pressure for her to pick a candidate without ethical lapses who could support her reform drive.

Presidential spokesman Min said it took Cheong Wa Dae considerable time to decide on the nomination of the prime minister because the office had difficulties with verifying candidates.

“It took a while to complete the nomination as the verification procedure focused on personal qualities of candidates rather than their philosophy, belief and ability,” he said.

Sources said Park, from the beginning, had excluded candidates with strongholds in the country’s southeastern region and those from the prosecution or courts.

She was instead looking for figures from the Chungcheong provinces, after her party lost all four gubernatorial seats in the central regions in the local elections last week, they said.

Lee, career diplomat, is known as a close confident of Park who maintained a moderate view on North Korea policies. Lee, 67, also served as NIS deputy director before he left for Japan to serve as the top South Korean envoy there.

Min said Lee has a deep understanding of both domestic and international security and is expected to serve the post to carry out a revamp of the spy agency that lost public trust after a series of scandals. If Lee wins parliamentary approval, he will take the post that has been remained vacant since former NIS chief Nam Jae-joon stepped down in the aftermath of the ferry disaster.

The president is expected to carry out a partial reshuffle of her aides in Cheong Wa Dae possibly within this week. She is also believed to bring a major shake-up in her Cabinet, after her trip to Central Asian nations next week.

Park has been under pressure to abandon Chief of Staff Kim Ki-choon, her long-time aide. Kim has been criticized for exercising too much power behind the scenes and making a series of unsuccessful and unbalanced nominations, relying heavily on his networks of prosecutors and judges. Kim, former justice minister, is the head of the presidential committee for personnel affairs.