[ The Korea Herald – Send E-mail ]
White Lies celebrates the art of tease
By Korea Herald
Published : Jun 10, 2014 - 20:57
Updated : Jun 10, 2014 - 20:57
On a Saturday night at Myung Wol Gwan Club in Hongdae, a crowd has gathered to watch women take their clothes off. But this is not a strip show ― there are no poles, no elevated stage and no leering old drunks reaching to stuff dollar bills in G-strings. The performers here are from the White Lies Burlesque Revue, and are here to celebrate the art of tease. The audience is mostly young women and men, cheering rowdily.

Nell Fox, Roxie Ramone and Strawberry Cherie are the core of the White Lies Burlesque Revue. There are four other women who also perform more occasionally.

The purpose of White Lies, according to Fox, is to “get together and celebrate the art of tease.”

“The art of tease is the ability to tell a story using your body and celebrating your sensuality through performance,” Fox says. The women choose a song and choreograph their own dance to go with it, and this dance usually involves taking off their clothing in a slow, sensual and teasing way. It is not the same as typical stripping, as Fox is keen to point out. 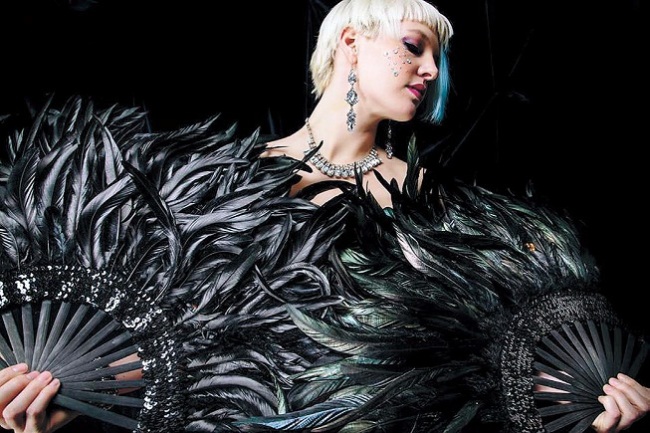 Nell Fox (Andy Faulk)
“People will say, ‘Oh, so you’re just a stripper,’” Fox says. “And we say no, there’s a big difference. Stripping is about just getting to that end point. You go up, and you take your clothes off. Hopefully if you’re a good stripper, you’ll make your money. For us, it’s about going up and celebrating what we’re doing. We’re having a good time, and it certainly isn’t about making money.”

“We decide what we take off, or even if we take things off,” Fox says. Fox points to the story of one woman who was in the revue before, and was “adamant” that only her husband got to see her underwear. So she’d take off a glove, or maybe a necklace. “For her, it was more about going up there and teasing the audience.”

They have also had men in the revue. The last one was Korean and has since been drafted for military service.

White Lies began as “Frills Thrills,” a burlesque revue originally run by a group of U.S. Army wives. They originally performed on base, and then branched out and did shows in Itaewon, then Hongdae.

“It was a much more traditional style back when they were doing it,” Fox says. “There was only a set genre of music, and certain styles of performances would just not have been permitted that we do now.”

A new leader came in later, and more was permitted. When Fox took over two years ago, she allowed the more genre-busting burlesque they perform now.

Strawberry Cherie, 26, from Toulouse, France, is the most daring of them all. She confesses that she has no interest in “looking sexy” for an audience.

Strawberry Cherie’s routine at Myung Wol Gwan did just that. She dressed in a sparkling red bustier, 30-centimeter high-heeled boots and 20-centimeter-long black fingernails, and her head was covered in a leather bondage mask. She also had a second, false head in a bondage mask on her shoulder, so she looked like a two-headed S&M queen. Much of her performance was done seated on the ground, and at one point, she dripped hot candlewax onto her arms, legs and body.

“I’m really into nightmares and dream-like images,” Cherie says, “and I want to use this kind of freak image and make it a kind of hotness, really beautiful.”

Roxie Ramone, 26, from New York, used to see a lot of burlesque back home. She went to a White Lies show last year, and thought it would be something she’d love to do.

Ramone is mostly inspired by music. “From the song I get the mood, and ideas of what I want to wear, and of course what I’m wearing determines what I’m taking off and how I’m taking it off.” At Myung Wol Gwan, she did a routine to Nancy Sinatra’s “Bang Bang,” much of it in an armchair.

Jamie Osetti, 24, from Toronto, first saw White Lies at the Korea Burn festival last year, and again at Myung Wol Gwon. “I love it,” she says. “I came back because it’s very fun. I like that it’s sexy without being obscene.” She added, “I like that it’s real women, you know,” meaning women of all shapes and sizes.

Chelsia Lee, a Korean woman in her mid-30s, said it was her first time seeing the show. “It’s beautiful,” she says. “They’re beautiful.”

But she added, “I want to see Korean ladies do this too.” She said she would definitely come back, and would “really recommend other Koreans come.”

Nell Fox admits they have shocked a few people, mostly Koreans, who don’t understand what burlesque is. This is particularly a problem if they’re part of a larger show with other acts.

“It’s very conservative here in some aspects,” Fox says. “For goodness sake, they threw a huge protest when Lady Gaga came to Korea.”

International beauty standards are a problem too. Fox argues that all women are sexy, and all should be able to perform if they want to.

“We have skinny girls, we have big girls, we have short and tall,” Fox says. “And there are so many girls who say ‘I would love to be in your group but I need to lose 10 pounds first.’”

Fox says that’s not what White Lies is about.

Burlesque got Fox into the modelling, and gave her a lot of confidence in how she looks.

“I think everybody’s awesome,” she says. “But I think burlesque helped me to see that for myself.”

Dave Hazzan is a freelance writer and editor in Korea. For more information about White Lies, email wl.burlesque@gmail.com or visit the group’s Facebook or MeetUp pages. ― Ed.