The slogans, which sometimes cost millions of dollars to come up with, were pulled for various reasons. “Sparkling Korea” was briefly withdrawn in the U.S. after the shooting rampage in Virginia by a Korean-American student in 2007. The word sparkle was feared to denote the muzzle flash of a gunshot.

Before that, there was “Dynamic Korea,” which was scrapped out of fears that it alluded to aggressive labor and antigovernment demonstrations.

In 2010, the Korea Tourism Organization presented a new tourism slogan, “Korea Be Inspired,” in an attempt to highlight the country’s culture and tradition. In the meantime, the number of foreign visitors to Korea has risen sharply thanks largely to the Korean culture boom in Asia. The country welcomed 10 million foreign visitors in 2012 ― a milestone for its tourism industry.

“Korea needs a new slogan that reflects the new dynamism of the country ― representing its present and future,” Byun Choo-suk, president of the Korea Tourism Organization, told The Korea Herald last week. “The current slogan sounds too local, abstract and fails to conceptualize the image of Korea.”

Byun, 58, led a career in advertising, and was a communication design professor before being picked to head the country’s tourism agency in April. 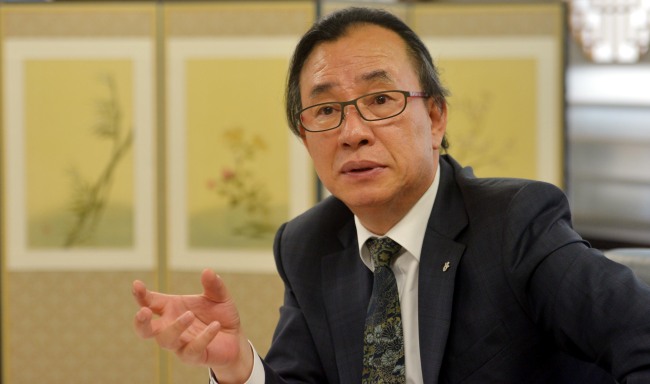 Byun Choo-suk, president of the Korea Tourism Organization, speaks about ways to promote Korea’s tourism during an interview with The Korea Herald on June 5 at his office in Seoul. ( Kim Myung-sub/The Korea Herald)

With years of know-how in communication design, Byun embarked on devising a new tourism slogan. He plans to completely revise the typical image of Korean tourism, which he says is associated with “tradition that is not even in practice today.”

“The royal guard changing ceremony at palaces in Seoul, traditional mask dances ... these are like museum displays. They are not part of the everyday lives of Koreans anymore. They are not sufficient to represent Korean tourism. Tradition refers to practices that live on today,” Byun noted.

He added that the soon-to-be-released slogan would reflect the vitality, charms and beauty of Korea. It will represent what still fascinates Koreans and foreigners, such as Korean music and dramas, active lifestyles, and Korea’s world-leading role in cosmetic care and conventions, he said.

A brilliant, new slogan alone will not be enough to achieve all this.

Byun will have to find ways to upgrade travel experiences for both foreigners and locals in order to boost Korean tourism, particularly the lagging local tourism market.

The country has been too dependent on Chinese tourists, whose arrivals account for about 40 percent of all total foreign visitors to Korea. The number of Japanese tourists, who used to make up the largest share, have been on a downward trend. Arrivals of Japanese tourists have fallen since 2012 amid the strained diplomatic relations between South Korea and Japan and the weakening yen. The number dropped 21.9 percent from 2012 to 2013. Moreover, safety concerns after the ferry sinking in April has left them wary.

Byun said it would take innovative and creative travel content to boost the local tourism market while ensuring travelers’ safety. The KTO has said it will set up a special task force in charge of checking safety of major travel facilities and develop safety manuals benchmarking Australian guidelines.

“We are cautious to promote local tourism after the ferry sinking, but we will start with revitalizing the local tourism market. We have to first appeal to Koreans and lure them to explore the country,” said Byun.

Byun believes boosting local tourism will help prepare each region to receive more foreign tourists with adequate accommodation and travel resources. “I hope it creates a virtuous circle,” he said.

To offer better travel experiences, the existing travel resources and programs need sophistication, he said. As an example, Byun suggested that Korean hot spas, or “jimjilbang,” could become a whole new relaxation and healthy experience when combined with the centuries-old Korean traditional underfloor heating system of “ondol.”

The immediate focus seems to be on young foreign tourists who are fascinated by Korean popular culture. With the recent popularity of the drama “My Love from the Star,” Byun expects it to herald another hallyu-driven tourism boom. “Utilizing the popular culture, we will slowly shift our target tourists from the older generation to younger ones,” Byun said.